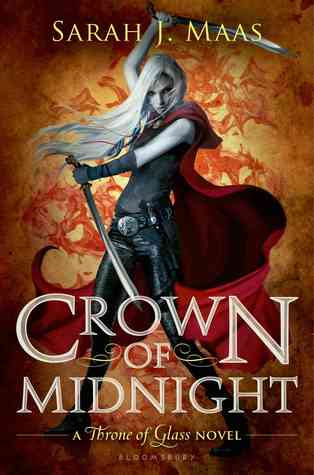 
Book Description:
An assassin’s loyalties are always in doubt.
But her heart never wavers.

My Thoughts and Review:
I have to start off by warning everyone that I adore this series. Every. Single. Thing. About. It. And with that adoration sometimes comes a whole lot of fan girlness so, be prepared, I warned you, this review may gush, horribly.

I have read every single thing about this series since reading the first book, every novella, passage and newsworthy material that I could get my hands on. That is something I don't normally do (okay once in a while I do but not as often as you would think). I have fallen in love with series before, heck I have a whole slew of series I love but there is just something about this series (or maybe it is just Calaena) that is just kick butt and irresistible.

One of the best things about Ms. Maas' writing is that although this is complete fantasy, she breathes life into it so much so that it becomes reality. Everything is real and anything is possible.

While this story is mostly Calaena's we get wonderful snippets into the mind of Chaol and Dorian as well, which I absolutely love. They add a depth to the story that wouldn't be there otherwise.

Calaena is just as kick butt as ever but this time we get to see more to her than just an assassin and all the fierceness that comes with her being one. She presents a softer side that while in others may be a weakness, only makes her that much stronger. I really love the softer caring side of Calaena we get to see. It really added a whole new depth to her and reminded me a lot of the side of her we got to see glimpses of in the novellas leading up to the series and her interactions with Sam.

Unfortunately we also get to see a side of her I never thought we would see again...the darker side of her that comes out when she is fiercely trying to protect those she loves. It about broke my heart to see that side of her thrive and dominate. But the revelations about that darker side and about Calaena put such a great spin on the series and I truly am dying to know how it will affect the next book.

Chaol is just as gruff and wonderful as ever. We get more insight into his thoughts and feelings about Calaena, and again, it doesn't make him weak but only more fabulous and worthy of being labeled a swoon worthy character. The protective side of him that comes out truly was endearing and I really, really, hope he plays a huge part in the next book because this story wouldn't be the same without him in it.

Dorian. Is it wrong that while I don't normally like love triangles in books, I love it in this one? That I was actually rooting for it? It says a lot about Maas' ability to write a great character and plot that I would be rooting for the very thing I sometimes despise in series. I was saddened at the turn of events that left Dorian and Calaena the way that it did in the first book and to see his heartache, was horrible. I think Dorian is a fantastic character and with the new revelations about him we discover, I can only imagine that his character will just get better and better and more will be revealed and again, I only hope to see more and more of him in the next book.

I am so excited for where this whole series is going. Ms. Maas has just proven to me time and time again with each new installment that the girl can write. Not only can she write but she does it beautifully. With rich detail, characters that come to life and a plot that is constantly twisting and changing and leaving you eager to know more.