Review: The Redemption of Callie and Kayden by Jessica Sorensen

Title: The Redemption of Callie and Kayden 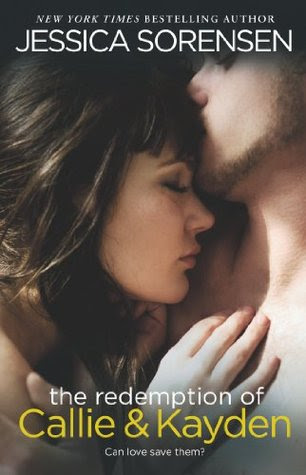 
Book Description:
The dark secret Kayden has kept hidden for years is out. Worse, he's facing charges for battery. The only way he stands a chance against the charges is if Callie speaks up, something he'll never ask her to do.

Callie knows Kayden is going back to his dark place and desperately wants to save him. But saving him means admitting her secrets aloud. Callie and Kayden are stronger than they think, especially when they're together. Together they move forward, face their demons, and finally start to heal from their traumatic pasts.


My Thoughts and Review:
I couldn't open this one up and read it fast enough after finishing The Coincidence of Callie and Kayden. The ending was a killer and left me anxious to delve right back in and find out what was in store of Callie and Kayden as their story continued.

My heart broke for both Callie and Kayden and I wanted to grab them both and squeeze them tight and protect them from their families, from the harsh world around them and from getting any more hurt put on them. I wanted to shield them from all the horrors they already went through and demand that they have their happily ever after, happiness within themselves and with each other and I was nervous that maybe, just maybe, they weren't going to get that happiness that they both so very much deserved and needed.

I love Kayden and my heart broke for him. For how worthless he felt, for the fact that he never knew what love was and for the fact that he certainly didn't think he deserved it in his life. It was sad and hard to read about, to think that anyone could feel that way and really think all the bad things that were said to him over the years could be true. To think that he deserved the way his father treated him and the way his mother ignored what was happening. Honestly, I wanted to smack them both (his mother and father). Parents are suppose to love and protect always, Kayden's parents did none of those things.

Kayden was so very lost when this book started. He was at the utmost low in his life even though he had Callie by his side. I love how realistic his story was. That even though he had good friends and someone who cared for him very much, it didn't fix his problems and make them magically disappear. He had to work to get past his demons and to learn what real happiness and love meant. It wasn't an easy or painless journey. It was real life told in a story.

Callie grows so much in this. She finds strength and courage that she didn't know she had and it was glorious to see. I am always all about the growth. I love when a character learns and grows and flourishes. She gets a little more feisty and flirty and really comes out of her shell. She doesn't have anything easy either but she really steps up in this and comes through shinning.

Luke and Seth were once again wonderful secondary characters and I loved how supportive they were and I really really want more of Luke's story. I really hope Sorensen explores that more and gives him his own story because I would love to read it.


This was an amazing, heartfelt emotional read that I think anyone would appreciate, enjoy and love.