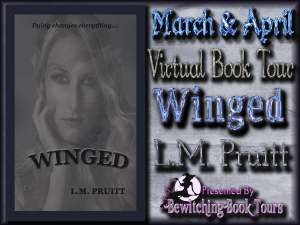 I fell from the Talmadge Bridge the week before I turned thirty.

I was given a choice: Go to Heaven. Go back to my life in Savannah. Or spend eternity fighting evil under the direction of the archangels.

I chose the demons--and the angels.

I chose the Winged.

L.M. Pruitt has been reading and writing for as long as she can remember. A native of Florida with a love of New Orleans, she has the uncanny ability to find humor in most things and would probably kill a plastic plant. She knows this because she's killed bamboo. Twice. As a result, she's not allowed to walk in the gardening department of any store without supervision. She's also not allowed in the card aisle of any grocery store without an escort since she'll spend thirty minutes opening cards and laughing for no good reason. She is the author of the best-selling Jude Magdalyn series, the Moon Rising series, and the Frankie Post series. She continues to make her home in Florida in spite of the heat and mosquitos and shares her home with two cats--one of them smart, the other not so much.

Connect with her at:

“All’s fair in love and war.” A simple phrase that has sparked years of debate and argument. The answer, of course, is far from simple. I’m not looking to step in to that particular arena today. Instead, I want to talk about what happends when you combine the two.

Specifically, when you introduce scenes of war into romance.

I’m a huge Jane Feather fan, especially her “V” series. Set during the early 1800s, more specifically around and right after the Battle of Waterloo, almost all of them make mention to the wars with Napoleon. While there are scenes of violence, they can’t be called explicit—the more heinous elements such as rape, torture, and murder are either handled delicately, alluded to, or narrowly avoided through plot elements.

None of this is criticism—when I pick up a Jane Feather book, I’m in it for the romance. She writes amazing stories with phenomenal characters. But sometimes… well, sometimes I want a little more depth to my historical events. Maybe that’s the history nerd in me—who knows.

When I first started writing WINGED and later as I continued the story with UPRISING, I found myself on the search for battles and skirmishes and sieges. I wanted events that people may or may not have heard of, events that could be easily “re-enacted”, events with a definite end. The Battle of Flodden Field, the Siege of Calais, even the Stonewall Inn Riots—each of these meet those critera.

And they all had horribly violent elements.

I could have sugar coated them. Downplayed the vein of brutality running through those events. Whether it’s a full out battle or people fighting in the streets, there is violence and brutality and ugliness. It’s romance—nobody expects the violence to be detailed and extreme.

But I believe that without that detail—without that close-up of violence—WINGED would lose its impact.

These aren’t just people and archangels. They’re warriors in a never-ending battle, facing opponents who won’t be afraid to kill them as soon as look at them. They live hard. They fight hard.

They love even harder.

“Men will do lots of stupid things when they think they’re in love.”

“Spoken from experience, right?” Ignoring James’s sputtering denials, I started searching my jeans for the tiny crucifix all full-fledged Winged were ordered to carry. I found it after a few minutes of frantic digging and equally frantic cursing. Pulling the small silver cross out, I held it up, exhaling loudly. “Thought I lost it in the jump.”

“That would have been unfortunate to say the least.” He pulled his out of his inside jacket pocket, bouncing it in his palm. “Holy Water?”

“We should be able to find a room service cart somewhere.” If not, we’d be forced to swipe something from the mini-bar when we broke into the room. Something told me the powers that be wouldn’t see the same humor in blessing a bottle of vodka as I would. “Did you bring any weapons?”

“Of course.” Reaching in to his jacket again, he pulled out two arming swords, tossing one to me. “This isn’t my first rodeo.”

“No, but it is our first succubus.” My blood started to race as the elevator rose higher, the lighted numbers clicking by faster and faster. “I haven’t decided yet if I love it or if I hate it.”

James didn’t bother to ask what I meant. Instead, he started swinging his sword in loose circles, his wrist cracking with each rotation. I crossed my right arm over my chest, opening up the muscles in my shoulder before switching to my left. My calves still ached but I forced myself through a series of lunges while James did the same.

The elevator dinged, the doors sliding open to reveal an opulent foyer. We stepped out, our footsteps muffled by the thick, lux carpet. The bronze numbers glinted in the low light, the key card lock glowing a steady green. A room service tray sat on the floor outside the door, the silver dome smudged with fingerprints, the champagne bucket dripping condensation.

“Bingo.” Sliding my sword into a belt loop, knocking it awkwardly against my ribs, I knelt down. I scooped the few remaining ice cubes from the bucket, my fingers going numb almost instantly. “You want to do the honors or should I?”

In response, James knelt next to me, holding his crucifix over the silver container. “Dear friends, this water will be used to remind us of our baptism. Ask God to bless it, and to keep us faithful to the Spirit he has given us.”

“In the name of the Father, the Son, and the Holy Ghost. Amen.” We crossed ourselves, me stumbling through the motions while James executed them with unerring precision. I huffed out a breath, shoving my crucifix back in my pocket. “Now comes the fun part.”

“I say I kick the door in, lure her out, and you throw the Holy Water on her.”

“As long as your plan to lure her out doesn’t consist of you dying in the throes of sexual passion, it sounds like a winner to me.” Reaching down I hefted the bucket up, doing my best to ignore the biting cold. “On three.”

“One.” James drew his sword, his fingers clenching around the hilt.

“Two.” I shifted my grip on the silver, prepared to sling the water at the first opportunity.

The door opened, a thin film of red fabric wafting into the hall on some invisible breeze. “Well. Looks like the slob in the bar is finally getting the picture.”

James’s eyes glazed over, his jaw slackening at whoever—whatever—he saw standing in the doorway. His fingers loosened on the sword and he took a step forward, his chest rising and falling with every frantic breath.

So much for not falling prey to her sexual lures.

Darting in front of him, I tossed the water at the entranceway, not bothering to aim. The crystal sconces in the hall shattered in response to the succubus’s scream, my eardrums following suit seconds later. Dropping the bucket, I drew my sword, thrusting it into her rapidly disintegrating chest.

She spit at me, the salvia burning like acid as it sprayed over my skin. Bright red lips twisted in a snarl over blinding white teeth—teeth sharpened to narrow points. “Bitch.”

“I’ve been called worse.” Yanking the sword free I plunged it in again, slicing diagonally down through her stomach. Tanned, taunt skin gave way to rolling, slimy ropes of intestines. A month ago I would have been sick. Now I was just annoyed when blood and viscera splashed on my jeans. “In case you’re wondering, we’re sending you back to Hell. Or wherever it is you came from.”

“You think you’re the first?” Somehow she managed to laugh, more flecks of blood spewing out. I wiped my face, the acid burning through the sleeve of my lightweight jacket. Her knees buckled and I yanked my sword free seconds before she hit the floor. “I’ll be back. I always am.”

My blade sliced through her neck without hesitation, ending further comment. Her head bounced once on the cream colored carpet before rolling to a stop next to my feet. I shuddered, inching backward until I bumped into James.

“Next time, you get to kick in the door.”

I turned around to find James slumped back against the wall. Sweat dripped down his faces, soaking his shirt. He smiled at me, or tried to, his lips barely moving. “My penis is apparently my Kryptonite.”

I stared at him for a moment before bursting in to slightly hysterical laughter. “Oh, my God. You made a joke. James, you made a joke.”

“Laugh all you want.” He pushed to a standing position, the smile blossoming with a wicked edge. “We’ve got another jump to do.”