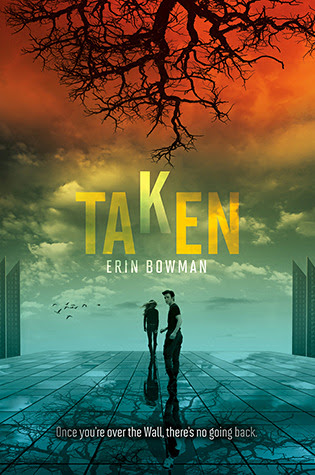 Title: Taken
Author: Erin Bowman
Series: Book One in the Taken Series
Published By: HarperTeen (April 16, 2013)
Source: ARC Copy Provided by the Author (in exchange for an honest review)
Genre: YA Dystopian
My Rating: 4 Stars!

Book Description:
There are no men in Claysoot. There are boys—but every one of them vanishes at midnight on his eighteenth birthday. The ground shakes, the wind howls, a blinding light descends…and he’s gone.They call it the Heist.Gray Weathersby’s eighteenth birthday is mere months away, and he’s prepared to meet his fate–until he finds a strange note from his mother and starts to question everything he’s been raised to accept: the Council leaders and their obvious secrets. The Heist itself. And what lies beyond the Wall that surrounds Claysoot–a structure that no one can cross and survive.Climbing the Wall is suicide, but what comes after the Heist could be worse. Should he sit back and wait to be taken–or risk everything on the hope of the other side?


I absolutely loved the direction this story took. The twists and turns and of course that fact that it is told in the male POV. I say this all the time I know but I am loving the books I have read this year in the male POV. There just aren't enough of them.

Gray is a fabulous character. He is impulsive, wears his heart on his sleeve and lets his emotions rule the way. He sometimes (okay most of the time) acts before he thinks and that can get the boy into trouble but either way, he always has good intentions and I love that about him. He is a little reckless and dangerous (not quite a bad boy) but he has a heart of gold and when he loves, he loves with his whole heart.

I know I have already said this in a review but, this year there are some seriously kick butt dystopians out there and this so happens to be one of them. Not only is it a great dystopian (slight Hunger Games feels to it) it is also a fantastic debut novel for Bowman.

Unfortunately it is also one of those novels were it is hard to review because I just don't want to give anything away. So much happens and so much is revealed that I don't want to say too much.

This novel is broken down into parts, four to be precise and without giving too much away they basically are life in Claysoot, outside the wall and then when Gray finally starts to see it all come together. To see what the Heist is really about. Why it exists and really to understand the world around him. Truly each part is better than the last. There are a lot of revelations, a few twists, some betrayals and new discoveries along the way. With each new challenge Gray was faced with, I found myself liking him more and more. I can't really say his character grows because he was already a strong character to begin with but he does learn a lot and he does change from the beginning of the book. Heck, it would have been impossible for him not to have. The world as he knew it got completely flipped and turned upside down.

I think Bowman did very well with this and I eagerly look forward to reading the sequel. I can see myself falling in love with these characters as the series grows and I am excited about what is in store for them next.