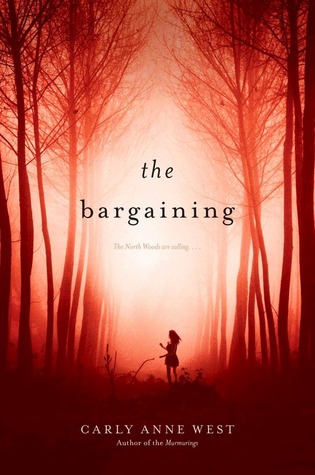 
Book Description:
The fact that neither of her parents wants to deal with her is nothing new to Penny. She’s used to being discussed like a problem, a problem her mother has finally passed on to her father. What she hasn’t gotten used to is her stepmother…especially when she finds out that she’ll have to spend the summer with April in the remote woods of Washington to restore a broken-down old house.

Set deep in a dense forest, the old Carver House is filled with abandoned antique furniture, rich architectural details, and its own chilling past. The only respite Penny can find away from April’s renovations is in Miller, the young guy who runs the local general store. He’s her only chance at a normal, and enjoyable, summer.

But Miller has his own connection to the Carver House, and it’s one that goes beyond the mysterious tapping Penny hears at her window, the handprints she finds smudging the glass panes, and the visions of children who beckon Penny to follow them into the dark woods. Miller’s past just might threaten to become the terror of Penny’s future….

I picked up this book because of the woods theme. For whatever reason, creepy dark forests that have a mind and story and life all of their own, just appeal to me.

I love the dark rich atmosphere, the creepiness and of course the mystery behind them. Who wasn't afraid to go into the woods alone at night? Who hasn't heard a good ghost story over a campfire and been too afraid to fall asleep at night?

There is just something I love about them and after combining the cover with the synopsis it was just a no brainer for me to pick this up and dive in.

I have to be brutally honest, this book wasn't quite what I was expecting. The first few chapters move a little slow and are a bit confusing. You have this great suspenseful epilogue and then...something else entirely when we flash to the present time. I hate to say it but, it moved rather slow and while I loved Penny's wit and sarcasm, I didn't quite love her.  But that might be in part to the fact that I wasn't sure what was going on with her. Her past and relationship with Rae was revealed slowly over the course of the book and I am not so sure that was a good idea. I think it might have been more insightful to have had it all out in the openearly on, since we already have the other mystery of the woods going on.

Which, speaking of, the woods! I loved the woods. So creepy and every bit as strange and bizarre as I was hoping they would be but again, the exact mystery behind the disappearance and reappearances of the kids was sometimes confusing and a little disjointed. I know it is suppose to be a mystery, and it was, a good one in the end, a crazy one in fact, but I think a little more could have been done to help reveal it and explain it. Not a whole lot is said and shown until way over the half way mark and even then, the ending still left me scratching my head wondering exactly what was going on. I mean, I know what happened but why? Why were the woods the way they were? What about the mural and the connection between it and the Dodson's? Why is none of this explained in the end?