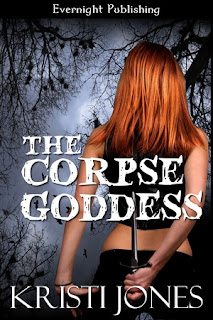 The Corpse Goddess
By Kristi Jones

Party girl Meg Highbury wakes up the morning of her twenty-first birthday with one hell of a hangover – and a walking corpse in her apartment.  Meg turns to her straight-laced neighbor Armando for help and together they discover that Meg is a Valkyrie.

What’s more, her first duty is to trade places with the corpse.  But Meg is being sent to her Death Duty too soon. In a race against time, Meg frantically tries to find a loophole to her gruesome fate, but while Meg is determined to live whatever the cost, Armando's strict moral principles keep getting in the way of her plans for escape.

Can Meg walk the 'right' and narrow path, possibly sacrificing her mortal life, for love? And if she can, will Armando have the stomach to love a rotting corpse of a girl who is falling apart in more ways than one? 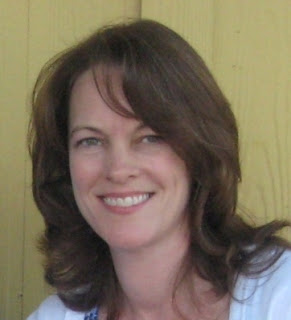 She currently lives in south Texas with her husband and two children, who inspire her daily.  She is a member of the Writers’ League of Texas and Romance Writers of America.  She loves old movies, being a Mom, the feel of paper in her hands and things that go bump in the night.


MGO: "I think it is really fascinating that you got to spend a lot of time as a child exploring England and checking out castles. Do you think that because of that experience you had as a child, it may have helped push you into becoming a writer?"

Kristi: "Absolutely! It’s impossible to explore a dungeon, walk through the Black Forest, or climb the heights of a cathedral without imagining who walked there before you. Travelling also gave me the opportunity to learn a new language and read many different pieces of literature. Putting my experiences into words became a sort of obsession with me."

MGO: "Who would you say has been the most influential person in your life?"

Kristi: "My husband Bryan. Through his example, I learned that with hard work you can accomplish anything. He didn’t bat an eye when I decided to write full time, leaving us a single-income household. Also, he never gave up on me…even when I was ready to give up on myself."
MGO: "How did you come up with the idea for The Corpse Goddess?"

Kristi: "I’ve always been fascinated with the belief systems involving Mother Earth and the goddess. Spending a good chunk of my childhood in Germany probably led me to the idea of a Valkyrie. I used to love the Asterix comic books and tales of the Norse gods and goddesses. I started to wonder how Valkyries would manage in this modern world of ours. Suddenly Meg Highbury popped into my head and I built my Valkyrie world around her.
So I have to ask, if you could be any kind of supernatural being who would you be and why?
Oh, I’d be a Valkyrie, no question! You live forever, you roam battlefields looking for gorgeous heroes and you look awesome in armor…of course, there is that pesky Death Duty that Meg deals with in The Corpse Goddess…."

MGO: "Do you have a favorite genre that you like to read?
I love it all! Really, I read everything. The written word is how I make sense of the world."

Kristi: "What plans do you have next for writing? Anything new you are working on?
Right now, I’m finishing up a paranormal romance about Raine Cunningham, a no-nonsense scientist who is forced to seek the help of a hunky medium when her Dad’s ghost shows up and won’t leave. Then I’m diving into book two of The Corpse Goddess, to see how Meg handles her new adversary."


I made the mistake of starting this book while trying to eat lunch at the same time, lets just say that didn't go so well.

If you have a weak stomach, this may not be the book for you.

I admit, I haven't read very many zombie books because the premises doesn't always appeal to me but I can say that this book was very different from any of the other zombies books I have read.

And while it was a little gross at times, it was very unique in the whole zombie/Valkyrie approach as well. Very creative and imaginative and really a really good storyline that I couldn't help but be enthralled by.

My only big problem was that the main character Meg, was pretty hard for me to like. I just didn't connect with her and at times I didn't even care about her, she was that unlikeable. She came across as a little selfish, mean to those who were only trying to help and whinny and just, well, just not the character for me.

But, if you took into account her childhood, her parents and the secrets they kept form her, well her attitude and behavior made sense and I found myself sort of liking her despite it all. Sort of.

Really this book was not what I was expecting at all and while I found myself being grossed out by some of it, it really was creative and imaginative and for that alone, I have to give it 3.5 Stars!