The Color Of Snow Blog Tour and Book Review!

Once again I am very excited to bring you another fabulous blog tour and guest post by the author of The Color of Snow,  Brenda Stanley! 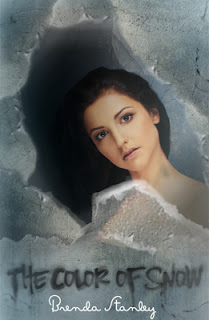 Synopsis:
When a beautiful 16-year-old girl named Sophie is found sequestered in a cage-like room in a rundown house in the desolate hills of Arbon Valley, Idaho, the entire community is shocked to learn she is the legendary Callidora--a baby girl who was kidnapped from her crib almost seventeen years ago and canonized in missing posters with portraits of what the fabled girl might resemble. Authorities soon learn that the cage was there to protect people from Sophie, because her biological father believes she is cursed.

Sophie is discovered after the man she knows as Papa, shoots and injures Damien, a young man who is trying to rescue her. Now, unsocialized and thrust into the world, and into a family she has never met, Sophie must decide whether she should accept her Papa’s claims that she is cursed and he was only trying to protect others, or trust the new people in her life who have their own agendas. Guided by a wise cousin, Sophie realizes that her most heartbreaking challenge is to decide if her love for Damien will destroy him like her Papa claims, or free her from past demons that haunt her mind.

Brenda Stanley is the former news anchor at her NBC affiliate KPVI in Eastern Iadho. Her writing has been recognized by the Scripps Howard Foundation, the Hearst Journalism Awards, the Idaho Press Club and the Society for Professional Journalists. She is a graduate of Dixie College in St. George, Utah, and the University of Utah in Salt Lake City. Brenda lived for two years in Ballard, Utah, within the Fort Duchesne reservation where the novel is set. She and her husband live on a small ranch near the Snake River with their horses and dogs.

The Color of Snow has been described as dark or mysterious.  I feel most of my writing fits this description because I enjoy looking at the strange and unusual things in life.  My novel will definitely make some people uncomfortable.  I like to look at situations and issues and try to figure out how people will react.  For years I was a crime reporter, so I enjoy investigating stories and learning about the parts of life most people try to hide.  When I wrote The Color of Snow, I was working on a story about a young girl who went missing years ago and has never been found.  I started thinking about what would happen if she were to suddenly show up now.  I loved putting myself in Sophie’s shoes and seeing things for the first time.

Sophie’s relationship with Damien is both intense and tempered.  Her father has raised her to believe that she will destroy anyone who truly loves her, so she is torn between her love for Damien and her fear of causing him harm.

The story changes between what is going on with Sophie and what happened in her parent’s past that brought her to where she is.  I wanted readers to experience the often isolated feeling of living in a vast rural area, but also the mental confinement of a small town.

Mental illness, teen pregnancy, religious intolerance, and racism are all big parts of The Color of Snow.  I like my characters to face challenges and see them grow from them.  It is not only the conflicts with the other characters that keeps the story going, but also those within the person’s own mind.

I wanted Sophie to be unusually beautiful so that people treated her strangely and therefore made her feel even more alien when she is first discovered.  She has transformed from a tragic kidnapping victim to a mythical ghost from the past and this makes her transition into her new life even more difficult.

My ties to the Mormon Church go back to my great-great grandparents.  I was raised in the teachings of the Mormon religion and even though I am no longer a member, I have many friends and family who are still very active in the church.  My descriptions of the Mormon culture are how I view it and how I feel someone who has never been exposed to it might see it.  I think there are a lot of people who are curious about the Mormon religion and have misconceptions.  I feel I’ve been both candid and fair in my portrayal.


I knew going into this read after the first few chapters that it was going to be a complicated story. One that was not just Sophie's story but Luke's as well. Maybe not even just their story either, but maybe all the characters stories.

I also knew once finishing it that writing a review for it wasn't going to be easy. Nothing about this story was easy, except maybe how easy it was to get swept into the storyline.

It was definitely unusual and had lots of twists and turns and was just...well, I don't think I have the proper words to describe it.

I really hope I can write a review that will give this book justice.

This book has a lot of very real and very serious issues in it. It isn't a light YA read by any means.
It deals with so many things that you are bound to get caught up in lives of the people, in their emotions, in their struggles, their love, their hate, and their sickness.

Stanley really did a beautiful job writing this, especially considering some of the heavy issues and circumstances that it covered. It is a raw gritty take on mental illness, on abuse, on love, on friendship, and on family.

So much transpires in Sophie's life and in Luke's that intertwines and all lead back to one another, things you don't always see coming and that knock you for a loop.

Sophie was a really strong character but not in the normal sense. There was a lot she didn't know and had to discover about not only herself but about life in general too and there were times that I didn't know if she was going to make it, if she was going to be as strong as she needed to be to get through it all, but she was and I was proud of her in the end.

This is one of those stories that will make you think and keep you on the edge of your seat in suspense wanting to find out more, wanting more of the story and wanting to know how it ends.

I give this one a very sold 4 Stars!

And a big thank you to Tribute Books for letting me read and review this and be a part of the Tour!!
Posted by Kindlemom at 5:00 AM