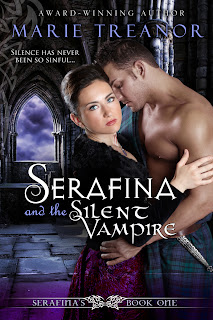 Silence has never been so sinful…

Serafina MacBride is psychic - but not strictly honest. While staging a hilarious vampire attack at a client's party, Sera is stunned to encounter a real vampire - annoying, gorgeous and inaudible to everyone but her. When her client's son is found dead with puncture wounds in his neck, she tracks the silent vampire to his lair.

But the amoral and seductive  Blair is also on a mission - to find and kill a nest of young vampires who've invaded his territory. Soon Sera is drawn into the bizarre world of the undead, where danger lurks in the shadows along with forbidden sensual delights - and a murderous conspiracy to flood the world with financially astute vampires who talk.

Supported and hindered by Blair's eccentric, undead friends, and by her own motley crew from Serafina's, Sera and Blair uncover surprising truths about each other and about the mysterious Founder from whom all vampires are descended.
In the end, Sera draws on powers she never knew she had in a frantic fight to defeat the forces of evil and preserve the strange, complicated being  she's trying so hard not to love. 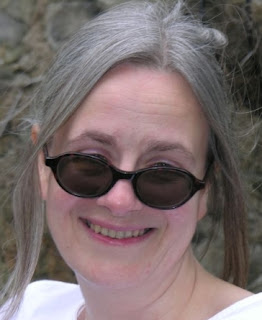 Marie Treanor lives in Scotland with her eccentric husband and three much-too-smart children. Having grown bored with city life, she resides these days in a picturesque village by the sea where she is lucky enough to enjoy herself avoiding housework and writing sensual stories of paranormal romance and fantasy.