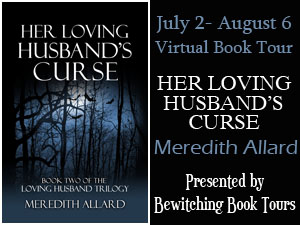 Not only do I get to be a part of Her Loving Husband's Curse by Meredith Allard Blog Tour (Hosted by Bewitching Book Tours) today but I also get to bring you not one, but two book reviews from the series.

I had the pleasure of reading the first book in the series, Her Dear and Loving Husband and liked it so much I had to read the second as well.

Below you will find both my thoughts and reviews on the series and a little more about each of them and the author. 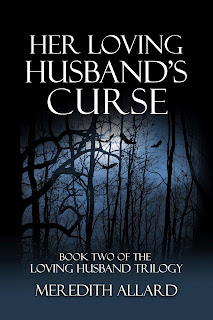 Her Loving Husband’s Curse
Book Two of The Loving Husband Trilogy
By Meredith Allard
How far will you go to protect the one you love?
Finally, after many long and lonely years, James Wentworth’s life is falling into place. Together with his wife, Sarah, the only woman he has ever loved, he has found the meaning behind her nightmares about the Salem Witch Trials, and now they are rebuilding the life they began together so long ago.
But the past is never far behind for the Wentworths. While Sarah is haunted by new visions, now about the baby she carried over three hundred years before, James is confronted with painful memories from his time with the Cherokee on the Trail of Tears. Through it all, the persistent reporter Kenneth Hempel reappears, still determined to prove that the undead walk the earth. If Hempel succeeds in his quest, James and Sarah will suffer. Will the curse of the vampire prevent James and Sarah from living their happily ever after?

I really enjoyed the first book in this trilogy and have been looking forward to reading the second. I really didn't want the first one to end.

Once again we get more mystery, more nightmares and more chaos, only this time a huge part of it centers around James instead of Sarah.

We get more of James' haunting past while he was searching for Sarah and waiting for her to come back to him. Of the things, places and people that he experienced and got to know along the way.

We also get more of Hempel. Yes Hempel is back and determined more than ever to prove that vampires exist and to let the world know. And oh goodness does he unleash a lot of evil along the way.

We also get a little surprise in the form of a new character, that I won't say anything about because I don't want to give anything away, but I will say this. The scene..it melted my heart and made me all teary eyed.

I couldn't of asked for a sweeter moment for James and Sarah and all that they have been through.

And boy did they need those sweet moments because what the rest of the story had in store for them was...well it was heartbreaking.

So much happened in this story I was completely wrapped up in it. I found myself getting teary eyed more than once and this time not because I was happy like before but because what was happening to James and Sarah was pretty devastating.

Needless to say, I don't want to give any more away but I will say this, I am anxiously awaiting the last book in the trilogy. I feel like I have become invested in James, Sarah, Jennifer, Olivia and the whole groups lives. I want to know what happens next and I want my happily ever after darn it!

I want to know how the author will pull it all together in the end. Oh I can't wait to read what happens next!

I give this one very 5 very well deserved Stars!!

MGO: When did you first know that you wanted to be a writer?

Meridith: I was lucky because I had some teachers throughout my years in school who told me I was a good writer, so I’ve been thinking of myself as writer since middle school. I decided I wanted to be a serious writer, as in getting published, when I was in college, and I’ve been working at it steadily since I graduated.

MGO: Who would you say has been the most influential person in your life?

Meridith: As a writer, I’d have to say Charles Dickens. More than anyone, he gave me a direction in my life I was probably lacking before. I knew I wanted to be a writer, but I wasn’t sure what kind. A journalist? A screenwriter? An essayist? Then, when I was in grad school I read Dickens’ novel David Copperfield, and I realized that was what I wanted to do—write novels like that. While I wouldn’t say I’m there yet, I will say I’m trying.

On a personal level, I’d have to say Oprah Winfrey. She taught me that I wasn’t destined to repeat mistakes and the world was open to me if I had the courage to go after my dreams.

MGO: What made you decide to write in the paranormal genre?

Meridith: I read Twilight and loved it, and because I loved the Twilight books I began watching True Blood on HBO. It was an episode of True Blood during its first season that spawned my idea about a vampire who continued to love his human wife long after her death. It was the idea for Her Dear & Loving Husband that prompted me to write in the paranormal genre. If I hadn’t started with Twilight and moved onto True Blood, I would never have been interested enough about vampires to write an entire trilogy about them.

MGO: I have to know, if you could be one supernatural creature what would you be and why?

Meridith: I’d have to go with the vampire here. I’m not a fan of blood in any form, but living forever (especially if I had a hunky vampire like James around) could be interesting.

MGO: Are you already working on book number three? If so, any hints at the name of the new book?

Meridith: Book Three definitely has a title, but I’m holding onto it a little longer because it might seem like a spoiler (even though it doesn’t mean what readers will think it means). I should have the new cover in about six weeks, and then afterwards I’ll do a cover reveal so everyone will have a chance to see the title. I did get some work done on Book Three over the summer—I got a lot of research done for the new historical period and I started the first draft. It’s bittersweet, knowing this is the last story in the James and Sarah saga. I’ve loved writing the books and sharing them with everyone.

MGO: Thank you so much Meridith for being here today!! 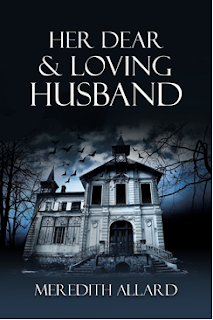 James Wentworth has a secret. He lives quietly in Salem, Massachusetts, making few ties with anyone. One night his private world is turned upside down when he meets Sarah Alexander, a dead ringer for his wife, Elizabeth. Though it has been years since Elizabeth's death, James cannot move on.

Sarah also has a secret. She is haunted by nightmares about the Salem Witch Trials, and every night she is awakened by visions of hangings, being arrested, and dying in jail. Despite the obstacles of their secrets, James and Sarah fall in love. As James comes to terms with his feelings for Sarah, he must dodge accusations from a reporter desperate to prove that James is not who, or what, he seems to be. Soon James and Sarah piece their stories together and discover a mystery that may bind them in ways they never imagined. Will James make the ultimate sacrifice to protect Sarah and prevent a new hunt from bringing hysteria to Salem again?


I love just about everything that has to do with witches and I have always been interested in the Salem Witch trials. Maybe it has something to do with watching too much BeWitched (which this book references by the way and I LOVED that!) while growing up, either way, I knew this novel was going to a lot of fun to read and I am so glad that I wasn't wrong about that.

Not only did I get the witches that I so love to read about but I also got werewolves, vampires, ghosts and a vampire hunter and oh yeah, a reincarnation too. Truly this had a little bit of everything in it. I think it was just lacking the crazed zombies and the fae.

I really liked how this story flowed and had real information about the Salem trials in it. As everyone probably knows now about me, since I say it so often, I love historical fiction almost as much as I love the paranormal so combining the two was fantastic.

I love how poetry was worked into the story as well. It just made the writing that much more. It gave it a little something extra sweet and made the romance between James and Sarah that much better for me.

I really look forward to reading the next book in the series. I can see this quickly becoming one of those favorite fun reads that you like when you just want something sweet and entertaining to read with characters that are familiar and ones you have grown to love over time. 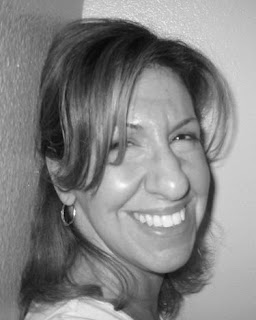 Meredith Allard is the Executive Editor of The Copperfield Review,  an award-winning literary journal for readers and writers of historical fiction. She received her B.A. and M.A. degrees in English from California State University, Northridge. She has taught writing to students aged 10 to 60, and she has taught creative writing and writing historical fiction workshops at Learning Tree University, UNLV, and the Las Vegas Writers Conference. Her writing has appeared in journals such as The Paumanok Review,  Moondance, Wild Mind,Muse Apprentice Guild, The Maxwell Digest, CarbLite, Writer’s Weekly, and ViewsHound. She lives in Las Vegas, Nevada.