Today I get to bring you a very special guest post by author Jacqueline Gardner, author of the YA series Thoughtless.

For those of you who may not remember I read and reviewed the first book in the series Thoughtless a few months ago and really enjoyed it. My review can be found here.

Which is why I am excited to have the author here today to tell us not only about the upcoming second book in the series, Besotted but to share a little something fun with us as well. 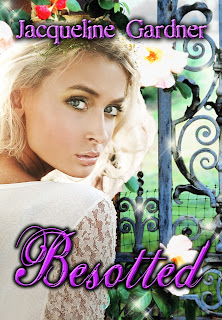 After narrowly escaping the serial killer out to steal her soul, Bridget dreams of a drama-free Junior year at Hartfield Manor.  But going to school with other teenage mind-readers is beyond complicated.  The headmaster greets Bridget with an alarming warning, the Coven is plotting something sinister, and Bridget's caught the eye of the hottest guy at Hartfield.  Suddenly one psychotic soul-sucker doesn't seem like such a big deal.

And then there's her ex-boyfriend Terrence.  Bars aren't enough to keep him away.

During high school, I was the girl who hung out with mostly guys. The downside to that? I didn't have many girlfriends to hang with. But I learned a heck of a lot about high school boys! (Though some things still remain a mystery.) At my school there were three basic types of boyfriends.
#1 His T-Shirt Spells N-e-r-d
Typically dubbed “the nice guy”, he's ecstatic you actually said yes! Though his gestures are always predictable, the fact that he cares so much makes you smile. The good – you never question his loyalty. The bad – your friends refer to him as an eager-to-please puppy.
#2 The Expensive Prada Bag
This is the guy that works hard to impress you without actually “trying too hard”. He name drops, brags, and makes you feel like the luckiest girl alive. He's practically Chuck Bass from Gossip Girl. The good – you find yourself rolling with the popular crowd. The bad – you're never really sure what he actually thinks of you.
#3 Sugary Poison
It's the can't eat, can't sleep, can't even survive another minute without texting him boyfriend. Like something out of Twilight, this boy steals away your every waking thought. The good – it's socially acceptable stalking. The bad - after the big break up, you're left trying to reconnect with the friends you pushed away.
In BESOTTED, the second book in the Thoughtless Series, Bridget is haunted by the mother of all exes! Terrence. He's not just an ex-boyfriend. He's a killer too. Their relationship definitely falls under the sugary poison category with a pinch of arsenic and betrayal (okay maybe more of a punch than a pinch).
What type of guys did/do you go to school with?
Posted by Kindlemom at 6:00 AM