In celebration of book three in the Illumine Series, Riven, being released next month I will be telling you a little about book one and two in the series, Illumine and Obumbrate as well as my thoughts and review on them.

Synopsis:
For the past five months Essallie Hanley has been trying to forget about the frightening murder of her boyfriend. Haunted by vivid nightmares and hallucinations of the event she does anything she can to pretend she's like every other normal girl in High School.

Only Essallie is far from normal. Able to conjure blue fire and a shimmering silhouette of wings from her body, he seeks the only known solace left to her name; her first home in Belfast,s Maine.

But she soon realizes that her return home is only the beginning of a long and twisted road taking her as far from her humanity as possible, with Kayden, the demon originally summoned to slaughter her, leading the way. Unable to touch her but oddly curious, he joins Essallie in her search to find out just what she is. But neither of them were prepared for the secrets they've begun to unravel, secrets that will change Essallie and everyone around her forever.

My Thoughts and Review on Illumine:


I am always up for something new and unique. Something that is not the norm in the YA genre. Lets face it, I read a lot of books, especially in YA so it is always nice to have something slightly out their and different and this series is just such a read.

Honestly, I wasn't expecting this to be so graphic. The opening scene drew me in with none other than morbid curiosity. I couldn't help but read one after the fated “party incident” even if it was gruesome. I mean, if you open a book with a scene like that, what is next?

And while all the scenes weren't that graphic, some still were. Some made me cringe and be thankful that I hadn't just eaten. But again, I kept reading because the storyline just fascinated me.

Essie was a hard character to relate to. I couldn't always follow her line of thinking and it didn't help that this wasn't one of those stories where everything is laid out in the open in the beginning. I was a little lost and confused by what exactly was going on. By the end of the read, thankfully, most of that confusion was cleared up and the ending left me wanting to pick up the second book, which I had right on my kindle just waiting for me to open it up and read it too.

Overall, I think this was a fast moving book packed full with lots of action (some gruesome), lots of mystery and characters that I can see caring about (hopefully) over time.

Synopsis:
Essallie Hanley just wishes her life could go back to normal. But what's normal when you carry the burden of knowing you're a half-angel created for war, that the only person who can help you is a demon still waiting to kill you, and that your only chance for salvation lied in a boy who died in front of you?

If Essallie had turned her back on everything she'd learned, she could have made the most of her fractured life. That is, until Kayden told her that she's a ticking time-bomb; that at any given moment her blood could betray her, her veins burning her alive from the inside out until nothing but ash remains.

Desperate to find answers, and possibly find her only chance for survival, Essallie heads back for New York City, back to the place where it all began. With every answer comes a price, and with every price the risks and rewards become greater. But when Essallie soon finds herself the target of an unknown hunter determined to kill her, she's at wits' end. That is, until a fellow Nephilim named Ari steps in. But is Ari a piece of the puzzle to her salvation, or the promise of her demise?

My Thoughts and Review on Obumbrate:

I picked up this one right after finishing the first one in the series. With an ending like the first one, I couldn't help but want to pick it up.

This is quite the original storyline. One that is pretty out there but not so out there that you find it completely hard to believe. It has just enough reality and fiction thrown in to make it a fun adventurous read.

I didn't quite connect with Essie in the first one so I was really hope this one would rectify that. And while I wouldn't say I connected to her, I did find myself liking her more and relating a little more to her.

I will say I liked Kayden a little more in this one. He wasn't portrayed as quite the demon monster he was in the first one but I still had a really hard time with Essie liking him and seeing him in any kind of romantic light. I think I just couldn't get past the first gruesome scene in Illumine to see him as anything other than the monster he was portrayed as.

I did however love Ari. He is a great addition to the series and one that I hope sticks by Essie and helps her along the way.

We get some new characters in this one, some good, some bad and also a whole lot more of the action and fast paced plot we saw in the first book.

Essie is growing up a little and starting to come into her own. She is dealing with fast issues and trying to move on and do what needs to be done before it is too late for her.

Again, this one ended with a slight cliffhanger. Nothing that made me want to chuck my Kindle acorss the room (thank goodness) but enough to make me want the third book immediately, which I didn't have unfortunately. I will definitely be picking it up though to see what plays out next. I can't help it, for whatever reason this series quickly got me hooked and I can only credit that to the writing of Ms. Anders.

Alivia Anders was thirteen when she fell headfirst into the world of internet fanfic and RPG-forum board sites that showed her the 'back door' into the world of writing. Four years and many hours spent glued to a computer screen later she found her true calling in writing.
Alivia currently lives with her family in her hometown of Coopersburg, PA. She frequently admits that if she wasn't so intolerant to dairy she'd live at her local ice cream shop called The Inside Scoop.

Book three in the series, Riven, will be out December 7th. 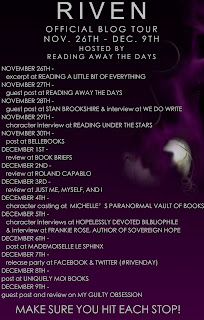 Captured, imprisoned, and left to burn.
You know what they say- where there's smoke there's fire...

For the last two weeks, Essallie Hanley has been a prisoner, in more ways than one. Held hostage by the Queen, she is forced to endure the mind-numbing pain tearing her body- and soul -apart, killing her with every tick of the clock. It seems all hope is lost, until one chance moment gives Essallie a name, Rinae Decante, the final person needed for the Queen to unveil her master plan to end Essallie. Armed with this name, and with the help of Ari and Kayden, Essallie breaks free from her captivity and launches in a search for this mystery girl.

But their search doesn't go as smoothly as planned, and the three soon find themselves fighting against an impenetrable course of fate aimed to destroy them all from the inside out. When Essallie falls victim to her altering soul, they all begin to wonder of there's any chance at all to save themselves from the burning effects of their actions.

Love, lies, and betrayal.
No one is safe from the undoing of secrets surrounding Essallie.