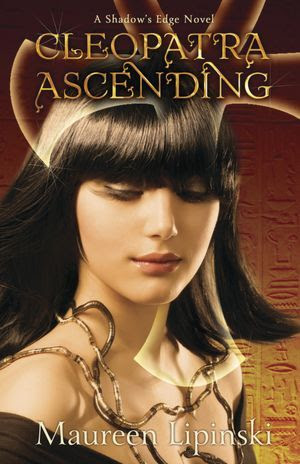 Despite living with a shaman, a witch, and a muse for sisters, Rhea Spencer feels like a normal teenager-even if she is the reincarnation of Cleopatra. But all that changes on Rhea's sixteenth birthday, when her visions of the Egyptian queen start unraveling a very different version of history, and Declan, a hot representative of the secret Order of Antony, shows up on the doorstep to keep her from being kidnapped. Together, Rhea and Declan travel to Egypt to stop the Octavians, a dark cabal trying to tap into Rhea's growing powers. The cabal seeks to access the magic deep below the desert sands, a potentially devastating force that only Rhea can protect.

I didn't realize going into this that this was actually the second book in a series, I have no idea how I didn't catch that but, there you have it. Having said that though, I had no issues whatsoever starting this one and catching up to things that happened in the first one. I never felt lost or confused at all and I love that.

In fact, I was pretty much immediately drawn into the story. I love how it started off, with us getting to see the last moments of the Queen's life, her decisions to end her rule and her loyal servants beside her.

I can't say I loved Rhea's character though. I just never warmed up to her and while I loved that she was suppose to be Cleopatra reincarnated, I wish we would have gotten just a little more about Cleopatra. I guess the history freak in my wanted more rich detail and mystery than what was presented.

This wasn't a bad read. In fact I liked the whole family, I just wish the whole thing would have had more background and detail to it, it just seemed to lack some much needed depth to the storyline and characters. It was a quick read and something that I think anyone looking for a fun light read would enjoy.
Posted by Kindlemom at 12:00 AM