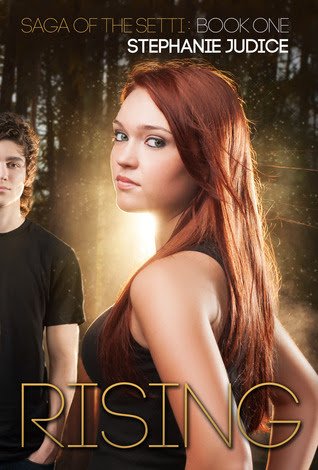 Title: Rising
Author: Stephanie Judice
Series: Book One in the Saga of the Setti
Published By: Studiokae (June 28, 2011)
Source: Copy Provided by the Author (in exchange for an honest review)
Genre: YA Sci Fi/Paranormal
My Rating: 4 Stars

Goodreads Description:
Having waited a millennium to return to the fertile feeding ground of earth, the dark giants break through a portal and storm out into the world in the guise of a massive hurricane—famished and fierce. Across the ocean, seventeen-year-old Gabriel Goddard is being plagued by terrifying nightmares about creatures that singe and burn the flesh then absorb the life energy of humans and devour the ashes. A chance meeting with Clara Dunaway immediately distracts Gabe from bad dreams. He has always had a sort of sixth sense—to feel the emotions of others around him. Clara’s presence numbs his other sense, nearly knocking him into a hypnotic state. Bewildered and fascinated, he is lured in by her. When Clara finally confesses that she has a similar gift to see auras around people, a spark flames between them, ignited by a paranormal force. Fate soon reveals that there is a higher purpose for their attraction. Along with Jeremy, the head-bangin’ metal head; Ben, the air-headed golden boy; Melanie, the kind- hearted Creole; and the old hermit named Homer, they must face this enemy as one. Discovering that they are descended from an ancient clan of Norse warriors, they awaken their dormant powers, preparing for the dark giants' imminent invasion of their home. A shadow of darkness veils the land. Will the Setti rise to fulfill their long-awaited destiny?

I wasn't sure what to except from this read, I am not a huge fan of sci fi and was really afraid that this was going to be a little out of my realm. Thankfully as I started reading it I realized that I had nothing to worry about.

While you could say this is a sci fi read it does have a flavor of paranormal in it and a very sweet romance that makes this a truly unique and great, easy read. In fact I ended up reading this in one sitting. I just flew through the pages.

I really loved the mishmash of characters this had. They were a unique group of teenagers (and one adult) that came together to be protectors of the world. And the romance between Gabe and Clara was so incredibly sweet. This story didn't have all the teenage angst some YA love stories had and it didn't have a love triangle in it which was really nice.

And while this had a very sweet love story theme to it, it was also so much more. There was a lot of action and adventure. Some drama and heartache too. I really liked the whole plot. It was different and fun and kept me interested.

This really was a great combination of all the things I love in a great read while adding something I normally don't like and making it into something that I actually really enjoyed.

This was a great start to a series and I will definitely be picking up the second book to see where the adventure goes from here. I want to know how it all ends. How they defeat the Reapers and what becomes of them all.
Posted by Kindlemom at 12:00 AM