Review: The Dead and Buried by Kim Harrington 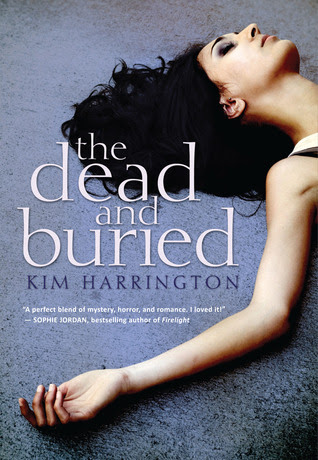 
Book Description:
A haunted house, a buried mystery, and a very angry ghost make this one unforgettable thriller.

Jade loves the house she's just moved into with her family. She doesn't even mind being the new girl at the high school: It's a fresh start, and there's that one guy with the dreamy blue eyes. . . . But then things begin happening. Strange, otherworldly things. Jade's little brother claims to see a glimmering girl in his room. Jade's jewelry gets moved around, as if by an invisible hand. Kids at school whisper behind her back like they know something she doesn't.

Soon, Jade must face an impossible fact: that her perfect house is haunted. Haunted by a ghost who's seeking not just vengeance, but the truth. The ghost of a girl who ruled Jade's school — until her untimely death last year. It's up to Jade to put the pieces together before her own life is at stake. As Jade investigates the mystery, she discovers that her new friends in town have more than a few deep, dark secrets. But is one of them a murderer?

This is the first book by Kim that I have read. I know, I know. You are thinking I am crazy right about now for not having tried one of her books sooner, am I right? Well, I am starting to think you're right after I finished this one. I mean, what was I thinking waiting so long before picking up one of her books?


To make matters worse, I actually own a couple of her other books and just haven't found the time to start them yet, something I will soon rectify no doubt.


I love a good ghost story. I mean really, who doesn't? It doesn't have to be night time or Halloween, I just need it to be good and creepy and this one was both creepy and good and even a little unpredictable.


And let's not forget that it had some pretty great characters. I really liked Jade she was just....good. Plain and simple. She was so true to herself and to others. She was willing to give everyone a reasonable chance without being stupid about it. She wasn't some helpless Mary Sue that needed to be bailed out all the time or was blind to what was right in front of her.


Donovan was pretty awesome too. He was so sad and broken that I just wanted to grab him and give him a great big hug. But don't get the wrong idea about him, he wasn't a helpless person either. He might have been broken but he was still strong.


I really love how the author gave Kayla her voice. Through her hauntings and mysterious diary entries. The hauntings were of course creepy, especially since, lets face it, Kayla was not a nice girl. She was mean, manipulative and selfish. She was a bully in life and not much changed in her death. Her diary entries gave us a great look into her inner thoughts and turmoil and added an extra air to the already intriguing mystery of her death.


This was really well done. I was pretty sure I knew from the beginning who the killer was but I didn't know for sure why and it was fun finding that out along the way.


There were even a couple of twists that I didn't see coming that made the story even better. I am glad everything was resolved and ended the way it did. I really enjoyed this and it was exactly what I needed on a dark and rainy day.
Posted by Kindlemom at 12:00 AM