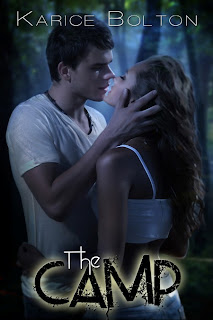 The Camp by Karice Bolton

Emma has always strove for perfection in her almost eighteen years of existence, but it has never been good enough. As she finds herself counting the days until she’s officially free from her parents’ reins, her stepfather hands her a plane ticket explaining that she must attend the Re-Boot Camp in the wilds of Alaska.

Once she lands in the middle of nowhere, she realizes the camp is nothing like she imagined, and she wants out immediately. That is until she meets Liam.
The camp is full of teens with dark pasts, but she finds herself drawn to Liam’s ability to see who she really is and who she wants to become. While Emma and Liam begin adjusting to a place neither want to be, frightening events begin to unfold. When people begin disappearing, it becomes apparent they can only trust one another as they fight for survival.

Goodreads link:
none at the moment