Mini Review: A Dawn Most Wicked by Susan Dennard

Title: A Dawn Most Wicked 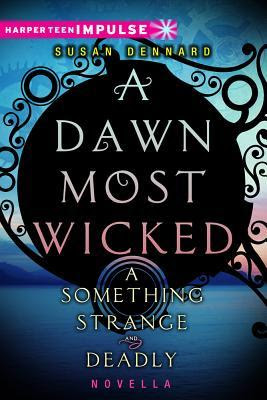 
Book Description:
Daniel Sheridan is an engineer’s apprentice on a haunted Mississippi steamer known as the Sadie Queen. His best friend–the apprentice pilot, Cassidy Cochran–also happens to be the girl he’s pining for…and the captain’s daughter. But when it looks like the Sadie Queen might get taken off the river, Daniel and Cassidy have to do whatever they can to stop the ghosts that plague the ship.
Fortunately, there happens to be a Creole gentleman on board by the name of Joseph Boyer-–and he just might be able to help them…


My Thoughts and Review:
I was so very happy to see Daniel be the star of this novella in the Strange and Deadly world, especially considering how the first book ended.

I really liked Daniel and it was nice to see the hospital scene through his eyes. To know what he was thinking and going through when he had to say goodbye to Eleanor.

Not only do we get that glimpse into Daniel but we really get where his story begins. Well, at least where it began with him meeting and joining Joseph and Jie. We also get why he had to end things the way he did with Eleanor. The guilt and loss he carries with him over someone years earlier that he loved then as well. Someone he cared very much for and someone that will always be a part of his life Someone he will never forget.

I absolutely loved the way this one ended. It ended with hope. And with that hope, a new beginning and a new adventure and I, for one, know that I want to be there, along for the ride.

*All opinions and thoughts are my own and were in no way influenced by the author or publisher. I was not compensated for this review*