Review: Dance of the Red Death by Bethany Griffin

Title: Dance of the Red Death 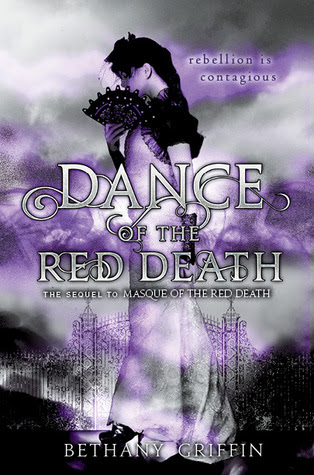 
Book Description:
In Dance of the Red Death, Araby’s world is in shambles—betrayal, death, disease, and evil forces surround her. She has no one to trust. But she finds herself and discovers that she will fight for the people she loves, and for her city.

Her revenge will take place at the menacing masked ball, though it could destroy her and everyone she loves…or it could turn her into a hero.


With a nod to Edgar Allan Poe, Bethany Griffin concludes her tragic and mysterious Red Death series with a heroine that young adult readers will never forget.

My Thoughts and Review:
I have been waiting for this sequel since finishing the ARC copy I received for review of the first book in the series and it is a testament to this series that I read this one on release day, that hardly ever happens for me, not because I don't want to but mostly because I just don't make the time because of other commitments. But with this one, I put everything on hold and dove right in.

Let me start off by saying this was everything that I was hoping it would be a more. It still stuck to that dark and gothic feel The Masque had but Araby was so much stronger and even fierce in this one that it brought a whole new level to the story. Gone was the girl who wished for death and hide behind her mask. Araby was a girl determined to save those she loved and a city she began to see beauty in, a city that needed a savior and hero. And she isn't the only one that grows throughout this whole thing, in fact they all do.

I never thought I would love Will again, that I would be able to forgive his transgressions, his betrayal but I was wrong, oh so wrong. He proved himself time and time again in this one, even when Araby wasn't ready to forgive him or trust him and even when he wasn't looking for her forgiveness.

Elliot too changed, more so than I ever thought he would, sometimes for the better and sometimes not.

So much happens in this one, so much told, revealed and discovered. Twists and turns I didn't see coming. Allies from unexpected people and friendships and bonds formed and shattered.

This was a stunning conclusion to the series and I absolutely devoured it. Once again Griffin shows that she knows how to write and draw you into the dark world that she created and get completely and inexplicably drawn into it so much so that you never want to find your way out. It all felt so real and so imaginative that at times I felt like I needed to reach up and check to make sure my mask was in place to keep me from the horrors around me.

I loved every minute of this and am sad it is over.

*All opinions and thoughts are my own and were not influenced by the author or publisher. I was not compensated for this review*