Review: Chosen Ones by Tiffany Truitt 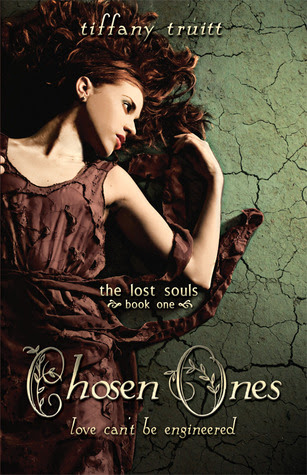 Book Description:
Life is bleak but uncomplicated for sixteen-year-old Tess, living in a not-too-distant future where the government, faced with humanity's extinction, created the Chosen Ones, artificial beings who are extraordinarily beautiful, unbelievably strong, and unabashedly deadly.


When Tess begins work at Templeton, a Chosen Ones training facility, she meets James, and the attraction is immediate in its intensity, overwhelming in its danger. But there is more to Templeton than Tess ever knew. Can she stand against her oppressors, even if it means giving up the only happiness in her life?

My Thoughts and Review:
Even though this one sort of gives off vibes of the Delirium Series by Lauren Oliver it pulled me right into the story and after a few pages I could tell that while yes, there were some similarities, this really was its own beast. Completely different.

I don't know what I was expecting but an epic love story was not one of them. I loved Tess. She was so strong and brave and even a little bit fierce not to mention lonely, confused and struggling so much with her inner self. I couldn't help but feel for her and that is something I really wasn't expecting.

The whole concept behind this one is rather chilling just because you can see it happening. You can see the world becoming the one Tess has grown up in. A world so lost and far (but not that far) from the one we live in it is hard to recognize. The world building was pretty fabulous too. We get exactly how the government came about, how things got to where they are as the story begins and you can feel the desperation of the people. A people that very much want to believe in what they are being told. A people that want to feel safe even though in reality they all have so much to lose, Chosen or Natural, are all far from safe of the creators and council members that decide the fate of what is left of the world. The eastern sectors versus the west. Sound familiar? Sound like something our own country once went through, only north versus south? Like I said, chilling.

What we don't get, why woman can no longer have healthy babies does stay a mystery up until the very end but it works, it is part of the mystery of the story and why we see what makes Tess, well, Tess.

I loved James and while I really was intrigued with Henry, I loved James from the beginning. And while I wouldn’t say this is a love triangle, I can see it being one in the works further on in the series and I am not sure if that bothers me or not because both boys are great in there own way but I can see my heart always belonging to James.


So much happens towards the end, so much is revealed, so much is said and so much is discovered. Tess really starts to become the girl I think she was always meant to be. So much stronger and surer of herself. I can't wait to see where the next book will take her.

*All thoughts and opinions are my won and were not influenced by the author or publisher. I was not compensated for this review in any way*