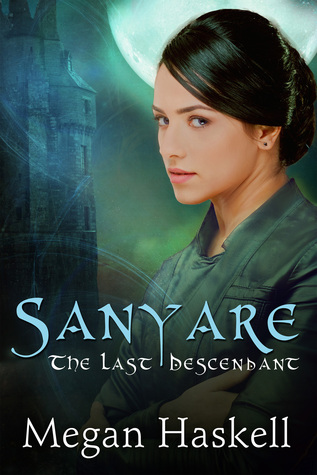 On a routine delivery in the Human Realm, Rie is attacked by assassins from the enemy Shadow Realm and framed as a traitor. Facing execution at the hand of an unmerciful king, she evades capture and crosses the portal into enemy lands to prove her innocence.

Surprising allies arise from the shadows, assisting her search and uncovering secrets she didn’t know she kept. With the risk of discovery lurking at every turn, Rie must use every weapon in her arsenal — and some she didn’t know she possessed — to uncover the truth behind the attack. Along the way, she discovers she might not be as human as she was led to believe, and her heritage could be more dangerous than she ever imagined.

As some of you may know I have only recently really embraced this genre and have declared it a favorite. And while it is quickly becoming a favorite, I do still struggle with it at times and am leery of starting series and books from authors I truly know nothing about.

Which is why even though I read the prequel and enjoyed it, I went into this with no expectations and if I'm being completely honest, a little leery as well. I had no idea what to expect when I opened the pages.

I can tell you what I got though, a fun, fast paced read full of mystery, twists, and characters that you will simply adore.

While I really liked fierce, kick butt Rie, I adored the pixies! Yes, you read that right, pixies. Gikl, Niinka, Possn, Hiinto, and Tiik were just so much darn fun. They were mischievous, spunky, and almost always getting into trouble, not to mention their slightly scary ability to munch on the bad guys. There was just something so fun and endearing about their loyalty to Rie and how they always had her back.

The  mystery was a great one too and honestly, the twists in this, I didn't see coming. Not to mention the wonderful blend of sups and magic and this was a read that I had a hard time putting down.

I really enjoyed every single aspect of it. It was well written, well designed, and the world building  had just the right amount of detail without being a huge info dump at one time and becoming overwhelming.

I honestly enjoyed this so much and I can't wait for more. The author truly has created something unique and original while still holding true to familiar concepts and creatures. I have to applaud her on her ability to mix so many details together and create something fun and unputdownable.