Review: The Conquering Dark by Clay Griffith and Susan Griffith 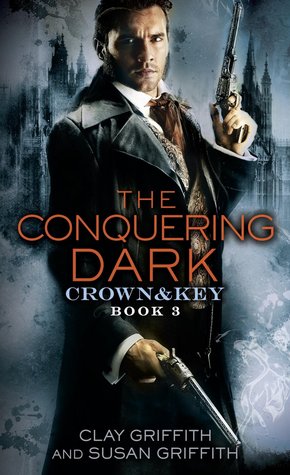 
Book Description:
he Crown and Key Society face their most terrifying villain yet: Gaios, a deranged demigod with the power to destroy Britain.

To avenge a centuries-old betrayal, Gaios is hell-bent on summoning the elemental forces of the earth to level London and bury Britain. The Crown and Key Society, a secret league consisting of a magician, an alchemist, and a monster-hunter, is the realm’s only hope—and to stop Gaios, they must gather their full strength and come together as a team, or the world will fall apart.

But Simon Archer, the Crown and Key’s leader and the last living magician-scribe, has lost his powers. As Gaios searches for the Stone of Scone, which will give him destructive dominion over the land, monster-hunter Malcolm MacFarlane, alchemist extraordinaire Kate Anstruther, gadget geek Penny Carter, and Charlotte the werewolf scramble to reconnect Simon to his magic before the world as they know it is left forever in ruins.

It didn't take long for the dynamic duo that are the Griffith's to win my heart over with their new UF series Crown & Key. It is so well written and full of everything I really look forward to in a good urban fantasy while still being unique, fresh, and fun.

With lovable characters that will leave a lasting impression on you, this series truly is stand out and I can't recommend it enough. With it's non-stop action, hint of romance, witty banter, adventure, danger, unnatural supernatural cast, steampunkish tendencies, and gorgeous Victorian London setting, this really is something special.

I couldn't wait to dive into this story and get more of everything. I adored the first two books and couldn't imagine that this would be any different, which I'm happy to report, it wasn't. This was just as engaging and hard to put down as its predecessors. In fact, I stayed up late into the night until I was finished because I just couldn't get enough.

Once again the Griffith's outdid themselves. Fast paced, plot driven, and infused with the character's themselves,  this was an amazing conclusion to the story arc.

I couldn't of been happier with the way everything happened. It is rare these days that we get an ending to anything that lives up to the rest of the books, the story itself and the characters, and the Griffith's managed to do all three, and do them well.

I am hoping like heck, that this isn't the last book in the series because I will truly miss all of these fabulous heart driven characters. They truly have made an impact on me and I couldn't imagine not reading about them again in the future.

*All thoughts and opinions are my own and were not influenced by the author or the publisher. I was not compensated for this review.*