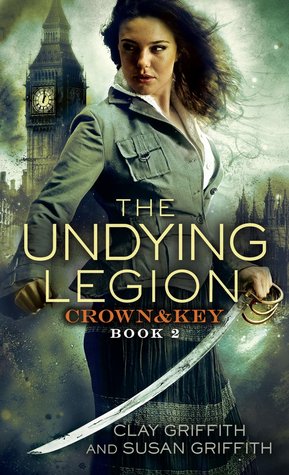 With a flood of dark magic about to engulf Victorian London, can a handful of heroes vanquish a legion of the undead?

When monster-hunter Malcolm MacFarlane comes across the gruesome aftermath of a ritual murder in a London church, he enlists the help of magician-scribe Simon Archer and alchemist extraordinaire Kate Anstruther. Studying the macabre scene, they struggle to understand obscure clues in the ancient Egyptian hieroglyphics carved into the victim’s heart—as well as bizarre mystical allusions to the romantic poetry of William Blake. One thing is clear: Some very potent black magic is at work.

But this human sacrifice is only the first in a series of ritualized slayings. Desperate to save lives while there is still time, Simon, Kate, and Malcolm—along with gadget geek Penny Carter and Charlotte, an adolescent werewolf—track down a necromancer who is reanimating the deceased. As the team battles an unrelenting army of undead, a powerful Egyptian mummy, and serpentine demons, the necromancer proves an elusive quarry. And when the true purpose of the ritual is revealed, the gifted allies must confront a destructive force that is positively apocalyptic.

When you love a first book in a series as much as I loved Shadow Revolution, it is with some trepidation that you open up book two. Not because you don't want to read it but rather, you don't want anything to make book one, the book you love, to not be as great as you remember it.

They say the second book in a series, sometimes can make or break it. You know, the dreaded second book, or middle book syndrome. The ones that sometimes have too much info dump, not enough action, and drag so very much, that you almost regret even starting the series to begin with.

Those are the reasons why most of us, dread opening that second book when the first one was so great. Will it live up to its predecessor or am I going to regret this later on?

Thankfully, I had no cause to be concerned. This was fabulous and reminded me all over again, why I loved the first book so very much.

With the steampunkish era, action, adventure, amazing characters, not to mention hints of magic and the sup world, this truly is a stand out fun series that I just can't seem to get enough of.

Simon, Malcolm, Katie, Imogen, Charlotte, Hogarth, Penny, truly, these are some of my favorite characters and my love for all of them grew exponentially throughout this story. I couldn't get enough of them.

I am so very thankfully that I have book three sitting right next to me because I am diving right into it.

This series has quickly become a favorite of mine and I can't wait to read more.