Welcome to my stop for the Chasing River blog tour!

I fell in love with Tucker's writing after reading the first book in this series, Burying Water and am so very excited to once again be a part of the tour for this amazing series!

We are absolutely thrilled to bring you the Review Tour for K.A. Tucker's CHASING RAIN! CHASING RIVER is a Suspenseful Romance novel, and the third novel in K.A. Tucker’s Burying Water Series, published by Atria books, an Imprint of Simon & Schuster. CHASING RIVER is set to be released July 7, 2015! If you haven't already, be sure to grab BURYING WATER and BECOMING RAIN, the first two books in this thrilling series!!

About CHASING RIVER: Armed with two years' worth of savings and the need to experience life outside the bubble of her Oregon small town, twenty-five-year old Amber Welles is prepared for anything. Except dying in Dublin. Had it not been for the bravery of a stranger, she might have. But he takes off before she has the chance to offer her gratitude. Twenty-four-year-old River Delaney is rattled. No one was supposed to get hurt. But then that American tourist showed up. He couldn't let her die, but he also couldn’t risk being identified at the scene—so, he ran. Back to his everyday life of running his family’s pub. Only, everyday life is getting more and more complicated, thanks to his brother, Aengus, and his criminal associations. When the American girl tracks River down, he quickly realizes how much he likes her, how wrong she is for him. And how dangerous it is to have her around. Chasing her off would be the smart move. Maybe it's because he saved her life, or maybe it's because he's completely different from everything she's left behind, but Amber finds herself chasing after River Delaney. Amber isn’t the kind of girl to chase after anyone. And River isn't the kind of guy she'd want to catch.

And don’t forget BURYING WATER and BECOMING RAIN, the first two books in this thrilling series… 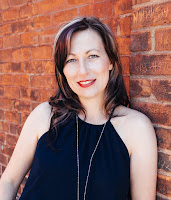 About K.A. Tucker: Born in small-town Ontario, K.A. Tucker published her first book at the age of six with the help of her elementary school librarian and a box of crayons. She currently resides in a quaint town outside of Toronto with her husband, two beautiful girls, and an exhausting brood of four-legged creatures.

It was hard not to already be half in love with Amber after reading Burying Water, which was why, going into Chasing River, I didn't hesitate at all. I knew I already liked her, cared about her, and wanted her to have one heck of a story.

Throw in a gorgeous Ireland setting and a handsome guy with a hero complex not to mention an Irish brogue and really, you can't go wrong.

I really enjoyed this read. I knew I would but it surprised me with how caught up I was in the chaos of River's family, in the IRA, and all the other little twists and turns this story took.

Throw in a relationship that gasp is not filled with angst and you had one heck of a slow burning, but quick romance that was every bit as hard to resist and it was to put down.

This wasn't quite as action packed as its predecessors but it was every bit as good and dangers still lurked here and there that the cast of characters had to suffer through and endure together.

Overall, this was a very enjoyable read that for me, stood out in the very prevalent genre of new adult. No same old same old here. Something fresh, new, and a story that held its own.