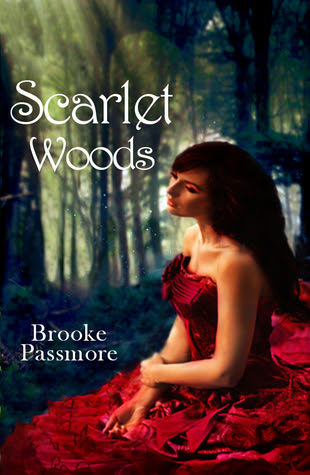 Synopsis:
Past, future, and love all exist in the door through time.

Modern and independent seventeen year old Morgan Westbrook thought she had seen all there was to her home town of Scarlet, Georgia, but one day while walking in the woods behind her house she discovers a mysterious door masked behind the trees. After admiring the door’s timeless beauty she walks through its entrance to venture into more woods, but what she doesn’t know is that the door is a gateway through time that takes her back to the year 1863 during the days of the Civil War in Scarlet.

Without knowing that she had traveled back in time, she stumbles upon Danny Carson, an attractive young man who is appalled to see that Morgan is wearing skimpy modern clothes instead of a nineteenth century dress. Although they find each other completely different than anyone they’ve ever known, they cannot help but feel drawn to one another. After spending time in another century, she discovers that she's time traveled back to the year 1863 and that the door took her there. For months she and Danny journey back and forth through the door to experience the joys of traveling to both of their centuries. When dilemmas of unwanted marriage, slavery, and war are thrown at them, they must face the perils that time travel has delivered them in both the future and the past.

I live in Broken Arrow, Oklahoma and am a 22 year old young woman who probably will never fully grow up. As a kid I played with Polly Pockets, swam in my swimming pool practically every day during the summer, and went on vacations to Disney World with my family (favorite days of my life). I loved telling stories as a kid by playing with my Polly’s and dressing up like princesses with my friends. Eventually everything that went on in my busy imagination I wrote down on paper in the late hours of the night.
When I was in sixth grade I moved into a new house with woods directly behind my backyard. I’d walk about the woods and loved trampling through the creek or getting lost in the trees. These trips through the woods gave me my inspiration for my book trilogy Scarlet Woods. My main character in my book is Morgan who lives in a house where the woods are right behind her backyard. My love for trees and anything woodsy definitely shows in my book and I hope I painted a pretty picture in readers’ heads about what Scarlet Woods looks like.
My favorite candies are Skittles and M&M’s. I put ketchup on practically anything with meat (even with chicken quesadillas). I’m a great fan of Florence and the Machine, The Beatles, Taylor Swift, Carrie Underwood, Birdie, and recently The Civil Wars. My favorite books are The Hunger Games, Shiver, and Wither. My favorite movies are Titanic and Gone with the Wind. The Vampire Diaries is the wonderful TV show I’m obsessed with (I’m a Delena lover!!). I hate ads on youtube that I repeatedly have to skip every single time I want to listen to the newest song from Glee. I love to smile, laugh, and purposefully sing loud and off key whenever my brother is around just to pester him. I have a cat named Phoebe who we named after Phoebe from Friends, a yorkie named Coco who we named because he likes to eat Cocoa Puffs, and a shih tzu maltese we named Indy after Indiana Jones. My favorite princess is Cinderella but I think my personality is a tie between Ariel and Belle so they’re all my ultimate faves. If I could choose a century to time travel to I’d probably choose the Victorian age, the roaring 20’s, the 1950’s, or the 1940’s. I think the Victorian age and the 1940’s were probably the most romantic eras in history and the 20’s and 50’s would probably the most fun!

MGO: In 20 words or less tell why we should read Scarlet Woods.

Brooke: Scarlet Woods is a very different kind of time traveling book. It’s magical and yet very realistic all at the same time. It has some intense moments and yet it has a little humor as well. If anyone is looking for a story of romance, history, and fantasy, then Scarlet Woods is hopefully right up your alley.

MGO: Where did you come up with the idea to write Scarlet Woods?

Brooke: I came up with the idea for the book partly because I have woods in my backyard. I always walked about the woods thinking of cool things that I wished would happen in the trees and so that was what got me into writing this book. I'm also a big fan of history and fantasy so putting both of those together into one story was very fun to write.

MGO: Tell us 2 things we might not know about you?

Brooke: I’m a dental assistant and I’m a wannabe Disney princess. (I think I look more like Cinderella with my blond hair but I act more like Ariel and Belle).

MGO: How long did it take for you to complete the book?

Brooke: I started the book when I was nineteen and I finished the book this year where I am now 22. I finished writing the story when I just turned 21 but I finished all of my editing this year. Since writing a big book like this was all very new to me the first go round, I think the second book in The Scarlet Woods Trilogy will be done faster since I know the ropes and my writing has improved.

MGO: What do you have in the works next?

Brooke: I am writing the second book to the Scarlet Woods Trilogy right now and I hope to be done with that soon. After that will be the third and final installment of the series and I'll be able to move on. I plan on writing a book that isn't a part of a series that's an intense, thrilling love story that I've had in my head since I was in tenth grade. Part of it has been written but I can't truly focus on it until my Scarlet Woods Trilogy is done. After that I have an idea for another Trilogy that's more fantasy/science fiction. I just came up with the idea this year and have started writing that sometimes too, but the Scarlet Woods books come first.

MGO: Thank you so much for being here today!