Review: Sealed With a Curse by Cecy Robson 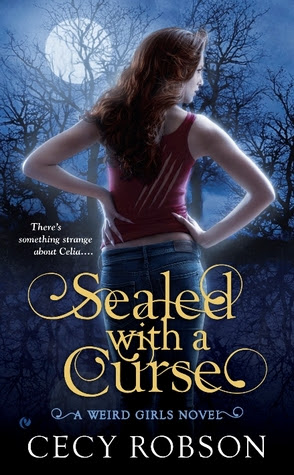 Title: Sealed With a Curse
Author: Cecy Robson
Series: Book One in the Weird Girls Series
Published By: Signet (Dec. 31, 2012)
Source: ARC Copy Provided by the Publisher (in exchange for an honest review)
Genre: Urban Fantasy
My Rating: 5 Stars!!

Goodreads Description:
Celia Wird and her three sisters are just like other 20-something girls—with one tiny exception: they're products of a backfired curse that has given each of them unique powers that make them, well, weird…

The Wird sisters are content to avoid the local vampires, werebeasts, and witches of the Lake Tahoe region—until one of them blows up a vampire in self-defense. Everyone knows vampires aren't aggressive, and killing one is punishable by death. But soon more bloodlust-fueled attacks occur, and the community wonders: are the vampires of Tahoe cursed with a plague?

Celia reluctantly agrees to help Misha, the handsome leader of an infected vampire family. But Aric, the head of the werewolf pack determined to destroy Misha's family to keep the region safe, warns Celia to stay out of the fight. Caught between two hot alphas, Celia must find a way to please everyone, save everyone, and oh yeah, not lose her heart to the wrong guy—or die a miserable death. Because now that the evil behind the plague knows who Celia is, it’s coming for her and her sisters. This Wird girl has never had it so tough.

It is rare that an Urban Fantasy book can grab me from the first few pages. Maybe because usually there is a lot of world and character building going on and sometimes that can make the story drag a little, even if the book is fabulous by the end.

But this book, this one definitely got me hooked after the first few pages. Their was action, humor, danger, sisterly bonding, witty one liners, something fun and completely unique and a whole new world just waiting to be discovered and I knew I wanted to discover it.

I immediately liked the Wird sisters and I knew this was going to be one heck of an adventure filled with lots of the sarcastic humor that I adore along with some kick butt women that wouldn't let me down.

I really didn't mean to start this one when I did. I downloaded it while waiting for one of my daughter's to be out of school thinking I would just read for a few minutes to get a feel for the story and before I knew it I was completely engrossed in the story and I didn't want to put it down. I love it when an author can capture my attention like that.

And even though I had another book I was really suppose to be reading, I had to read this. I just had to, the story and characters demanded it and who am I to argue? Besides, I hate confrontation and no way was I going to tick off the tiger...

I will admit that as much as I didn't want to put this one down I did when I found out there was a prequel called The Weird Girls. I am so glad I did too because the novella gave a lot of background on the Wird Sisters that I was missing with Sealed With a Curse. Their past and the whole thing with the witch coven confrontation when they first moved into town, what happened to their parents. Also more about their powers and how they came to get them. Really this is a must read before you even start this one. So much is told and explained.

I absolutely love Celia. She is fierce and protective and just plain kick butt. She is everything I love in a strong female heroine. Well really all the sisters are. Taran is hilarious with her sailor mouth, Emme with her sweetness and Shayna with her “dudes” , I loved them all.

And can we talk about the men? Yum! There is definitely some eye candy in this one and I really hope we get more background info on some of them because I would love to learn more about them as the series progresses and I have a feeling, Gem, Koda, Aric, Misha and Liam will play a very big part in the next books, at least I really hope so!

Robson has outdone herself. It is hard finding something really great in the adult genre to read that is different and really can capture my attention (other than series I already read) and this one definitely has all of that. I will be pre-ordering the next book in the series for sure and not only will I be ordering it, but I will be anxiously awaiting it.