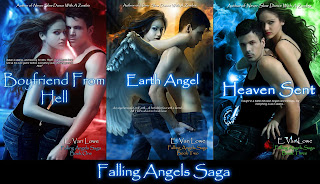 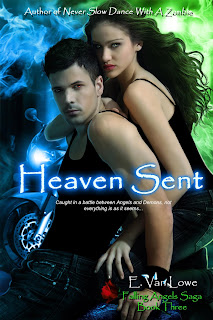 Megan has precious little time to unravel the cryptic message hidden in the riddle she received at the end of Earth Angel. If she doesn’t, the life of someone most dear to her will be lost forever, and Megan may yet find herself living in HELL.
Excerpt : http://evanlowe.com/wp-content/uploads/2011/08/Sneak_Peek_-_Heaven_Sent2.pdf Megan Barnett has recently defeated Satan, found a fantastic new best friend, and has won the heart of deliciously handsome, Guy Matson. But that doesn’t mean her troubles are over. Far from it. For Megan doesn’t realize that she is in possession of a powerful paranormal weapon, a weapon sought after by both angels, demons and everything in between.
In E. Van Lowe’s romantic yet thrilling sequel to Boyfriend From Hell, Megan finds herself in a gripping life or death battle to save the boy she loves, and all of mankind from unthinkable evil. 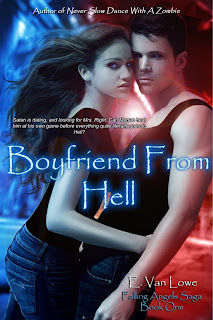 Aww, Hell No!
Fifteen year-old Megan Barnett and her single mom, Suze, have a special relationship—they are friends, close friends, who do almost everything together.
“But come on, guys, she’s my mother… Can I really tell her that while we’re snuggled up on the sofa watching Spider Man Three, I’m secretly undressing James Franco with my eyes? Of course not…”
The special bond takes a turn for the worse when Suze decides to start dating again. She hasn’t had a man in her life since Megan’s father left ten years ago.
Enter two mysterious young men, Megan’s new classmate, sinfully attractive bad boy, Guy Matson, and the dangerously handsome art dealer, Armando. Before long Megan and Suze both wind up in steamy relationships. But neither of the handsome guys is quite what he seems. In fact, one of them is Satan, with his sights set on a new bride. Megan has precious little time to figure out how to stop him. If she doesn’t, either Megan or Suze are quite literally going to HELL. 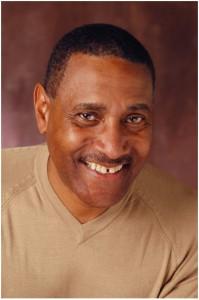 About The Author
E. Van Lowe is an author, television writer, screen-writer, playwright and producer who has worked on such TV shows as "The Cosby Show," "Even Stevens," and "Homeboys In Outer Space." He has been nominated for both an Emmy and an Academy Award. His first YA Paranormal novel, "Never Slow Dance With A Zombie," was a selection of The Scholastic Book Club, and a nominee for an American Library Association Award. His Best Selling novels, “Boyfriend From Hell” and “Earth Angel,” are the first two books in the Falling Angels Saga. “The Zombie Always Knocks Twice” is the first book in his Hollyweird series.
E lives in Beverly Hills California with his spouse, a werewolf, several zombies and a fairy godmother who grants him wishes from time-to-time.
www.evanlowe.com
http://vanlowe.blogspot.com/
http://www.facebook.com/pages/E-Van-Lowe/152364748167154

Guest Post:
Song For My Father
The 1965 Jazz classic, Song For My Father, was written by pianist Horace Silver as an homage to his father. Silver’s father had a great effect on the man he became. Like Horace Silver, I owe my father a great deal. I owe my writing career to him. No, he didn’t inspire me to become a writer; instead, his inspiration came as a challenge to me when I was nine or ten years old.
It was at that age my local library in the Bronx, New York allowed kids to have their own library cards. Having my own library card was a big deal to me. A very big deal. That library card catapulted me into the ranks of Big Kids, for I no longer had to go to the library with my mother.
As soon as I got my card I took out the maximum six books form the library. When I walked home with all my books cradled in my arms that day, I felt my load of books screaming to my friends and neighbors “E. Van Lowe is no longer a baby. Big Kid over here.”
I kept the books for the obligatory two weeks, took them back and got six more. This went on for several months until one day my father (who was off work) stopped me as I was leaving the apartment. “You didn’t read those books,” he said.
“Yes, I did.”
“No. I’ve been watching you. You may have thumbed through one or two, but you didn’t read any of them.” And then he made the challenge. “This time, why don’t you take out only two books and read them.”
You can imagine how upset I was. I got a special feeling carrying those six books home every two weeks. What kind of message would two books send: “Look at that. E. Van Lowe’s a weakling. He can only carry two books.” Fortunately for me, I was a dutiful kid and did what my father suggested—I only took out two books. When I got home I read one of them. I mean, I actually read it. The book still had its share of pictures in it, but I found the story in the book mesmerizing. I read it cover-to-cover. I enjoyed it so much, I read it again. Who knew reading could be so much fun?
The book was entitled Horse On A Houseboat. I don’t remember the title of the second book I took out, don’t remember if I finished it. What I still remember to this day, However, is that Horse On A Houseboat started my love affair with books. It was a year or so later I decided I not only wanted to read books, I wanted to write them, too.
This post is my song for my father. “Hey, Dad, I couldn’t have had the wonderful life I have without your little challenge.” Look at me. Today I am an author. On December 15th the latest in The Falling Angels Saga, Heaven Sent, will be available for sale. It’s no Horse On A Houseboat, but who knows, maybe some young person will pick it up one day and it will begin their love affair with books.