Review: Nobody But Us by Kristin Halbrook 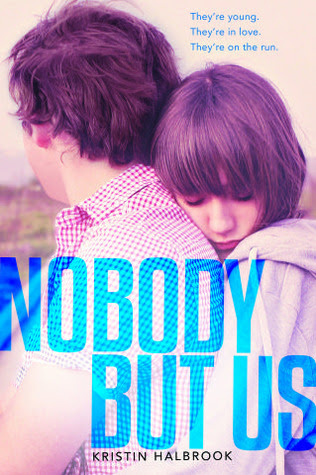 Title: Nobody But Us
Author: Kristin Halbrook
Series: Stand Alone
Published By: HarperTeen (Jan. 29, 2013)
Source: ARC Copy Provided by the Publisher (in exchange for an honest review)
Gerne: YA/NA Contemporary
My Rating: 4 Stars!

Book Description:
Bonnie and Clyde meets IF I STAY in this addictively heart-wrenching story of two desperate teenagers on the run from their pasts.

They’re young. They’re in love. They’re on the run.

Zoe wants to save Will as much as Will wants to save Zoe. When Will turns eighteen, they decide to run away together. But they never expected their escape to be so fraught with danger....

When the whole world is after you, sometimes it seems like you can’t run fast enough.

Nobody But Us, told in alternating perspectives from Will and Zoe, is an unflinching novel, in turns heartbreaking and hopeful, about survival, choices, and love...and how having love doesn’t always mean that you get a happy ending. Described as “beautiful, heartbreaking, and exhilarating” by Kody Keplinger, author of The DUFF, Nobody But Us will prove irresistible to fans of Nina Lacour, Jenny Han, and Sara Zarr.


Yeah, they make a lot of big mistakes. Yeah, Will is angry and does some stupid stuff, more than his fair share but lets face it, he had a really messed up life and really, he loves Zoe. So very much. All he wants to do is keep her safe and to love her. He just doesn't always come about it the right way and doesn't always make the best choices to keep her safe, in fact he sometimes does the exact opposite. But he loves her, how ever screwed up that love seems at times.


Like I said, two very young, very broken people just trying to love one another and make a whole together because separate, they are anything but whole.


And I could see the beauty in that. The heartache. The horrible lives that these two people never should have had to live and go through.


They were so lost and hurt, until they found each other and there is just something so heartwarming and heartbreaking about that to me. About being better together and getting what you can't get by yourself and finding it in another person. Making them and yourself better (even if it doesn't always seem that way at times, they did make each other better, just you know, in a messed up way).


This isn't a story with a happily ever after. This isn't a love conquers all or even one about good versus evil because their love was strong and pure but their actions weren't and they were in the real world where good things sometimes happen and sometimes bad things happen and sometimes, sometimes we make really bad choices even when we don't mean to. Sometimes bad things happen when we try really hard to be good.


This is a story about love. About loving someone so much sometimes it is wrong. About sacrifice. About strength, about healing and about making someone else better for having known and loved you even when that love was wrong.
Posted by Kindlemom at 12:00 AM