Book Promotion and Giveaway: XII: the Genesis by Brian Palmer and Jason Rowe 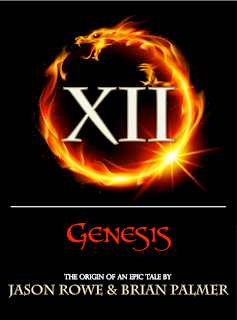 
Book Description: A century after the world was predicted to end, it was indeed reborn. Under the leadership of the Overseer of New Earth, minds were united, diseases were cured, and the Earth was healed when population centers minimized mankind’s footprint, and the remainder of the planet was turned over to the will of nature. War was eradicated, the world embraced one religion, and the New Era began.
But darkness rises now, mistaken for a mere shadow cast by the bright light of human progress. It is the time of which the ancients foretold. It is the time when all things must end. …It is the time of The Twelve. Six men and six women representing all creeds and colors are supernaturally gifted, but the unlikeliest of heroes. They are barely adults by the world’s standards, but still they are called.Only they can stand against the growing darkness – but will they stand together?XII: Genesis is the first installment of an eight-book series. If action excites you, if the supernatural intrigues you, and if love compels you - then you are invited to join The Twelve in their fight against the growing darkness that threatens New Earth!

Brian's Bio: Brian Palmer has been a creative freelance writer for print and online publications in the music, literary, film and sports worlds since 2004. He graduated with a degree in English and an emphasis in creative writing from the University of Puget Sound in 2000. The XII saga is unlike any creative endeavor he has ever participated in, and it thrills him to no end. Apart from writing, Brian loves spending time with his wife and daughter, watching sports (and occasionally attempting to play them very poorly!), reading and spreading the word about non-profit organizations which are involved in rescuing women and girls from the sex and human trafficking trades.

Jason's Bio: Jason Rowe is a published nonfiction writer and journalist, and has been a creative writer professionally for nearly 20 years. Jason first had the vision for the XII saga back in 2001, but it was only after sharing the vision with Brian in 2008 that this eight-book series began to take shape. He has a saint of a wife (high school sweetheart), is the proud father of five boys (two with special needs), works as an executive of a digital marketing and communications agency when he's wearing his "Clark Kent" glasses, and in his "free time" works with high school and college students in leadership training and mentorship. Jason, his wife, and his teenage sons also serve as advocates and volunteers for causes near and dear to their hearts such as autism awareness and support, sex trade/human trafficking rescue, and international relief and development.

The giveaway will be one mobi or epub copy emailed to the winner by one of the authors. This is open internationally.