Blog Tour, Book Review and Giveaway: Date With the Dead by Chris Myers 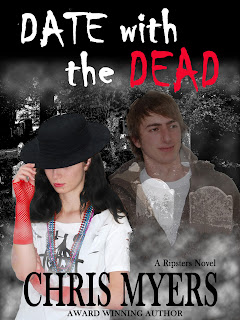 
Links to find/buy your book:


Book Description:
Sixteen-year-old Jolie Livingston’s closest and only friend Drew is this really hot dead guy, and it bites that the self-absorbed princesses at school cannot even see him. That’s right she can communicate with the dead. It’s the living she has trouble with. She and her mom inherited this awesome crib in Plymouth, MA. It’s quite a step-up from the homeless shelter in New Orleans, but there’s a catch. They can’t afford the past due mortgage, so Jolie’s working on that.

Jolie starts a ghost hunting business called Ripsters. Somehow she’s managed to recruit Brittany, a glamour SAP smothered in pink, and a techie allergic to ghosts. Brit actually thinks he resembles the R&B singer Chris Brown. All that pink has clouded her vision. They both have special talents Jolie’s hoping will be useful to their venture. Right now, they’re working for a family in need of major therapy due to a dead guy with a hole in his head.

Hayden, a really cute guy, who lost his Wiccan mother, wants to join them, but Jolie’s grandmother warned her about his kind. Not that it matters. Jolie seriously doubts a living guy as hot as Hayden will be interested in a girl cozy with the dead.

My Thoughts and Review:
This is yet another one of those books that took me completely by surprise with how much I enjoyed it. 2013 seems to already be filled with great new authors and series that are bound to appeal to many book lovers out there and lovers of the YA paranormal genre in general.


This was an action packed mystery filled with the paranormal element and creepy factor I love along with a sweet budding romance that will bound to please everyone.


Jolie was a great character with some pretty kick butt powers. And although I love these types of stories I have to say, I don't think I would ever want to deal with the things they do. Seeing ghosts? Talking to them and helping solve their issues? Fighting of demons and vengeful beings from beyond? So not for me!


This was filled with a whole slew of great characters. Characters that couldn't be more different if they tried.


Truly this was just one of those books you can pick up and know that you are going to get a fun entertaining read that will let you just get away for a few hours.


I will be picking up future releases in the series for sure.

Giveaways:
US Only
a Rafflecopter giveaway


International Giveaway:
a Rafflecopter giveaway
Posted by Kindlemom at 12:00 AM