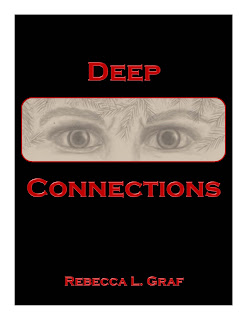 Synopsis:
Just as love appears, so does the darkness. With her heart reaching out for one man, Brenna finds herself the target of an unknown stalker. Who is he? What does he want? How far will he go for her? Death is an option. Brenna discovers more than she bargained for and learns that the stalker will kill for her. It all comes down to decisions, and no matter what she chooses it will demand sacrifice and someone's blood.

About the Author:
Rebecca lives in Brown Deer, Wisconsin with her husband and three children and has lived in Kentucky, Alabama, Tennessee, and Wisconsin. Graduated from the University of Montevallo with an accounting degree, Rebecca writing after 20 years in the accounting field.

Reading is a passion of Rebecca's that has spilled over into her writing. She has been writing online for 3 years on a variety topics including history, education, religion, and facts of life.

She runs the website A Book Lover's Library (abookloverslibrary.com) and is a partner in a new publishing company called Silver Tongue Press (silvertonguepress.com)

Believe it or not, Deep Connections came from a dream. I was working full time and going to school full time. As I was lying in bed, I couldn’t sleep. When that happens, I think of possible stories or movies and drift off. From there the story of a couple who find themselves as soul mates just from a shock every time they touched came about. All from a dream.
That dream kept bugging me. I couldn’t get it out of my head. It would interrupt my studies. It would interrupt my work. A friend of mine suggested that I write it out to get it out of my head. So, I did. Then I found out that I was trapped and couldn’t get out.
The story started off as a simple romance. Before I knew it I wrote this scene where the main character was kidnapped by some dark, mysterious figure. Where did that come from? Suddenly, my story took a whole new turn. I then had to go back and rewrite every bit of it to bring this new aspect in. I wrote and rewrote probably a dozen or more times.
Each time I went through the story, I came up with a new scene and a new path for the story to take. Before I knew it, I wrote this one scene and stopped. I knew then that there had to be a sequel. I had to leave the reader hanging.
The romance was from a dream. The stalker was a trick the muse played on me and is still laughing about. The paranormal aspect spun from the connection the main couple had. I thought it would be great to know who you were meant to be with if you touched and you felt a literal spark. That would be so cool. Well, if you can do that surely there are other really cool things that you could do. That led into the shape shifter thing and the strange things the stalker could do. To be honest, it got really out of hand. All of a sudden, the characters were taking over and the book was nothing like it originally started. My characters took it down a whole new path, and an obedient writer follows their characters wherever they go.
From a dream to a character mutiny. That is where the inspiration for the story came from. I’m just a passenger on this trip.

Posted by Kindlemom at 4:00 AM