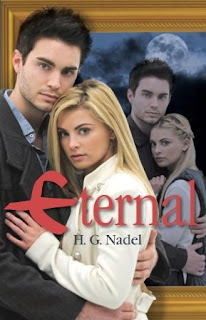 Book Description:
A love story that spans across continents and centuries.Julia Jones is an eighteen-year-old science prodigy with a big secret. After landing a prestigious internship with brilliant but eccentric Dr. Caleb Bertel, she is finally ready to move on from her mother's death. But after Julia revives Dr. Bertel from a near-fatal electrocution, strange things start to happen.Without warning, Dr. Bertel disappears. Then Julia receives threatening notes on her car, and someone has her followed. The young police officer assigned to the case, Austin Moore, believes the events are connected and asks her to help him solve the mystery of Bertel's disappearance. Instantly attracted to him, Julia agrees. Still, she knows that she has seen Austin somewhere before, if only she could put her finger on it.Will Julia uncover the mystery of Bertel's disappearance before it's too late, and does she dare trust Austin with her heart?

This is going to be hard to review without giving too much away but I will say that the history nerd in me really loved how this story wasn't just about any couple in time, about any reincarnation of sorts, but rather about a very famous couple in French history. A classic french tale of a Romeo and his Juliet, the tale of Abelard and Heloise.

I don't want to give anything away but, their tale is very much a tragedy and one that still involves a lot of mystery and intrigue to this day as very little is really truly known about their relationship. All that is left of their tale are some “love letters” and a man claiming to be their son and a whole lot of maybes.

This is so much more than just a tale of reincarnation though or even the tale of Pierre and Heloise. Yes it is about Austin and Julia, their current life and what brings them together once more. But it is also about science (which is funny considering that is what Pierre and Heloise discussed most in their letters to each other in real life) and two people brought together, both grieving and both dappling in something that was probably better left alone. Something that not only brought Julia and Austin together but something that has changed the lives of many around them.

Again, I don't want to say too much but there is definitely a paranormal element to this. One involving past lives, demons, possession, ghosts, old grudges, conspiracies and so much more that I can't even get into without giving away too many spoilers.

This really wasn't what I was expecting from this read at all, I was expecting just another average story about two people reunited over time. A tale about destiny and meant to be's.

I really loved the author's take on Heloise and Pierre and the obvious research she did into their story while make it true to the actual story but still giving it (obviously) a different twist in time (both then and now). It was different but in a good way. It made the story interesting and kept me wanting to read on. There were twists I didn't expect and things I didn't see coming.

As for the ending, I am not sure what to think of that, other than maybe a sequel is in the works? I can only hope that is what it means.