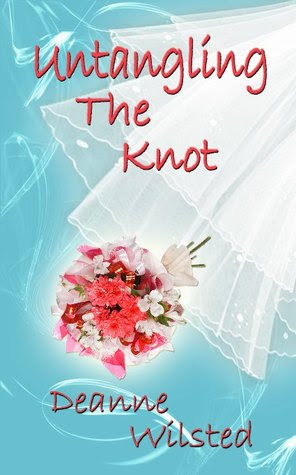 “I did what?”
Twenty-eight-year-old Gabriella Bessu is St. Therese’s meticulous wedding ceremony coordinator. So the fact that she has mistakenly registered her newest couple for an annulment, rather than a wedding, sends her Catholic guilt into overdrive.
But who can blame her? The groom is gorgeous and his two kids tug at Gabriella’s heart in a way that overcomes all her best intentions. Before long, she’s in over her head, fixing her mixed-up plans and helping the children and dad come to terms with their haunting grief for the mother and wife they lost years earlier.
Can Gabriella untangle her own fears and accept the messy life that God has handed them?


To be honest I was a little hesitant going into this read, mostly because I knew it has a slight Christian theme to it and I was really hoping that it wouldn't turn out to be preachy. I don't mind religion in books, I myself am quite religious but I hate feeling like I am being preached to (I know, I know, that probably doesn't make sense). Either way, I didn't need to worry. Why there are religious undertones to this story it isn't preachy at all and I never felt like the book took anything too far or over the top. The religious aspect of it is there but in a very subtle nice way.

I really liked Gabriella. She was reserved (but still a little fiery), kind, strong and had a heart of gold. She wanted what was best for everyone and always seemed to know what were the right things to do and say with Peter and Chloe, who were still very much grieving over the loss of their mother two years earlier. She wasn't perfect, she had her own demons to work out but that made her all the better. I think her hardships made her who she was, made her understanding and caring and someone you would want to be with.

Father O'Shea was surprisingly another favorite of mine. He too was kind but he was also a little mischievous and wanted what was best for everyone, even if that meant he had to push and meddle a little in the process to get what he thought was “right” for those he cared about. You could see that he too had a heart of gold.

I liked Ryan but, I didn't love him. Sometimes I felt like he really needed a good smack over the head for him to open his eyes, see what was around him (mostly his kids and how they were dealing with his wife's death) and start dealing with the things that needed dealt with. To stop turning a blind eye to things that were staring him right in the face (and okay, maybe even all the signs that things were not as they should be!). It was a little frustrating at times.

I did feel for him being a single dad trying to raise two children on his own and really, doing the best he could but I really thought he could of handled so many things so much better and really, in a lot more time than he had (that will make more sense to you once you read the story, I promise!).

I did love his moments with Chloe and Peter though. They were great kids and I really liked that we got small glimpses throughout the story into their thoughts and feelings as well, it was a nice touch to the story.

This was a little slower paced than what I would have liked but overall it was a very heartwarming story filled with learning to let go and love again and to follow your heart, no matter what.