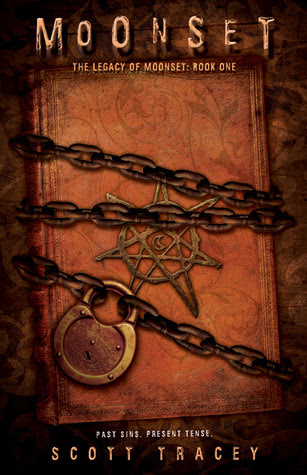 Title: Moonset
Author: Scott Tracey
Series: Book One in the Legacy of Moonset Series
Published By: Flux (April 8, 2013)
Source: ARC Copy Provided by the Publisher (in exchange for an honest review)
Genre: YA Fantasy
My Rating: 3.5 Stars!

Book Description:
Justin Daggett, his trouble-making sister, and their three orphan-witch friends have gotten themselves kicked out of high school. Again. Now they’ve ended up in Carrow Mills, New York, the town where their parents—members of the terrorist witch organization known as Moonset—began their evil experiments with the dark arts one generation ago.When the siblings are accused of unleashing black magic on the town, Justin fights to prove their innocence. But tracking down the true culprit leads him to a terrifying discovery about Moonset’s past . . . and its deadly future.


This is the first book by Tracey I have read so I wasn't sure what to expect. Really I picked up this book because of the synopsis. Who doesn't love a good story filled with mystery, danger, curses, ghosts and witches? I couldn't of picked a better book to try by this author because I truly enjoyed it. I really liked his writing style and the fact that this was told from the male POV of Justin. I have said this before but it bares saying again, there just aren't enough books in the YA genre told through the male POV.

I liked Justin, I liked being inside his head. He had a strong voice without being overbearing or too loud. He felt very real to me. I could see his protective side when he was with his siblings and although he didn't know it, I could see the leader in him too. I love how his character grew throughout the story and the strong leader he became by the end.

This had a few twists I didn't see coming and few that I did. I enjoyed all of the chapters starting off with either a journal entry from one of the members of Moonset, from a Counsel member or from a news article. It added something interesting and sometimes insightful to the storyline.

My only real complaint is that I wish there would have been a little more background info on the world Justin lives in. I knew most humans didn't know about the existence of magic and witches, but did the government? Did higher ups at the schools? It wasn't anything huge just something I wondered throughout the story and was never made clear. I am guessing they didn't but, again, I may be wrong since that is just a guess.

I do wish there would have been a little more background on Justin's parents, especially is father but again, that is something we seem to be learning along the way right along with Justin. And as Justin has already found out, some of the things he is learning are things he never guessed possible. Things that may change how he looks at them forever.

Really I think this was done well and I will definitely be continuing on with the series. I was intrigued enough to want more and to find out all the questions that were left unanswered about Moonset, covens, the Counsel and Justin's parents in general. Plus, with an ending like that one, how could I not want to find out what happens next?
Posted by Kindlemom at 12:30 AM