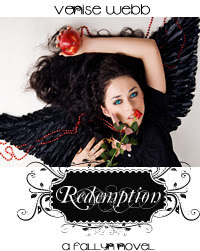 Shayne“I was just a normal guy from a normal family planted right dead smack in the middle of Normal Town, U.S.A.”Shayne Naughton’s world has been turned upside down. His family and friends are acting weird. Strange men are following him or calling his cellphone in the middle of class. A magical purple-haired new kid is doing strange things to his classmates. And a gorgeous, redhead demon is out for his blood, thinking it is the key to unleashing her demon husband from Hell. He used to be just a normal guy until she showed up at his school and changed his world.Fallyn“As I fade away, in my last moments I have the tiniest bit of hope that I shall see my father's home once more. In that moment, I will know that I've been redeemed.”Fallyn Galen has made many, grave, mistakes over her lifetime. She’s accepted her fate. All she wants to do is to make amends before her final punishment. But, then she’s sent to Redemption, Massachusetts and the soul she didn’t know she had connects with him. Now she is alive again and feeling things she’s never felt. Shayne Naughton may just be the redemption she was looking for, if only she can keep him alive long enough for him to learn to love her for exactly who, and what, she is.Redemption is Venise Webb’s debut novel for the new Fallyn series. An epic battle is brewing between Heaven, Hell and Earth. Right there in the middle of it all is Fallyn and Shayne. Is their soul connection can be the key to protecting the world or the weapon to destroy it?

Venise Webb grew up in Chicago, Illinois, where she first discovered her passion for books. She wrote her first story in the third grade about the misadventures of a young girl in an inner city school. That passion grew into an obsession for books of all genres and sizes. She now lives in Birmingham, Alabama with her three sons and a big colorful, southern family. When she is not reading, she is making up stories of her own. She also enjoys listening to music, baking and is learning to knit.

The Five Ways Fallyn and I Are Exactly Alike
Creating one of the main characters of my newly released book, Redemption, was almost effortlessly. Fallyn pretty much wrote herself. She came to me one and I knew exactly how I wanted her to be. She was such a strong character, I needed to soften her up a bit. I respected her strength so I added parts of myself (the goofy, geeky parts) to round her out a bit.

He remained silent so long that I started to worry. I stood up and started to walk around the bed towards him. He must have felt my movements because he turned from the window and speared me with an enraged glare.

"Don't," he said harshly, so much so that I was almost put off from my mission.

"I'm sorry about that barrage of images I just attacked you with." I gave a nervous laugh, desperately wanting to lighten the too tense moment and take that look out of his eyes. I held my hand towards him. "I will focus this time."

"Don't touch me," he said through tightly clenched, white teeth. His voice was a barely-there whisper.

I took a deep breath and tried again. "What Erik said is the truth but it is not the full story. Let me show you_"

"I said, DON'T TOUCH ME." The words ripped out of his body in a tortured scream, so violent that I jumped back a step.

I took a deep breath, willing my mind to think of a solution to this tumultuous moment. It was important that I handled this with care. I hated to think about the outcome if I didn't.

"You need to know the whole truth," I pleaded with him while making myself look into his eyes, now darkened with barely-controlled fury.

"You're right, I do. I should have been told the whole truth a while ago." He turned back to stare out into the night, his body held so stiffly that I feared it would splinter and shatter into pieces at the slightest touch.

"You will learn everything while finishing the connection."

Another harsh, humorless laugh erupted from him. "You think I want to be connected to you? After all of this?"

He snapped his head around to glare at me over his shoulder. "Here's a suggestion. You got something to say, do it like a normal person and speak."

Okay, so this wasn't going to be easy. I knew that coming here. Still, his open hostility and anger wasn't helping much. But, I knew that getting angry in return would only make things more difficult.

I took a small, uneasy step towards him but stopped as his eyes turned distrusting. I clamped my hands together in front of me and fidgeted with my fingers. I never fidgeted. All the more proof that this situation unnerved me.

'I don't know where to start,' I said softly to myself, in my mind, looking but not finding the words that would make everything in my history not so despicable. I lowered my head to look at my feet as if the answers I was searching for was somehow there.

Of course, being my soul mate, he heard my inner workings. "How about explaining to me how you can go from being an angel to creating those things that killed my parents."

My eyes snapped back up to him. He was turned fully towards me, his back resting against the wall beside the window. "It's complicated. I never intended any of this to happen. I....don't make the best decisions."

"That's the understatement of the year," he said sarcastically.

A piece of my patience broke and I couldn't stop the remark that came next. "Look, this is hard enough for me without your smart ass remarks?"

He pushed off the wall with his shoulder but didn't take a step closer to me—probably afraid that I would try to touch him or something. "Hard for you?" he asked pointing a long, tan finger in my direction. "What about me? You knew how they died. You knew. You didn't say a word. You promised to help get rid of the monsters that took their lives. I took you to their grave. You stood there on their gravesite and lied to me."

"I didn't lie. I am taking care of the vampires."

"You didn't tell me you were one of them." He took a few steps forwards until his tall body loomed over my much shorter one.

"I'm not," I defended, my body appearing even smaller as my shoulders sagged and I tried to sink into myself.

"DON'T LIE TO ME," he barked, causing me to jump and take a step back. I didn't fear him physically, that was just ridiculous. However I did fear him all the ways that matter; emotionally, spiritually and mentally.

I didn't know how I would survive if he hated me because of my past. That was why I continued to protest. "I'm not. Not anymore. I don't drink blood. I haven't killed a human for over a thousand of years."

"But you have killed, right? How many?" He took a menacing step towards me. I held up a hand to ward him from getting any closer. The hostility radiated off him and threatened to choke me.

"Shayne, …," I started but quickly clamped my mouth shut. He took another step forward until his chest pressed up against my palm.

"How many kids had to watch while you slaughtered their parents and destroyed their lives?" His voice was a low rumble that held a false calm that contradicted the fire burning in his eyes.

I started shaking my head before the third word left his mouth. "None. That was Erik's thing. His game. He got off on that type of torture. I never did. It wasn't about that for me. It was me searching for something."

"You," I stated truthfully. His body froze except for the muscle in his jaw that jumped. I rushed on to explain before I lost my nerve. "I didn't know it then but I was looking for you. That feeling you give me. What I feel when I'm with you. You touched me for the first time and for the first time I felt whole."

"I completed you?" his inquired, his voice going soft. He tilted his head, his eyes searching.

"Yes," I breathed out with relief that he was getting it. My face broke out in a big smile and I dropped my hand from his chest and took a step forward. One look in his eyes and the smile instantly fell from my face.

"You broke me," he whispered painfully, making my own chest constrict in pain. I gasped and stepped back, his comment hitting me like a sledgehammer to the face.

2 e-book copies of Redemption gifted through Amazon by the author
There is also a $100 Gift Card giveaway to Amazon going on through the author's FB Page that can be found HERE! You have to like her page in order to be entered into the $100 gift card giveaway.