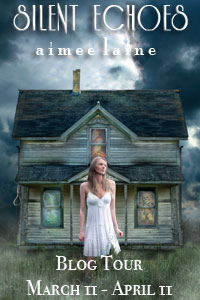 Aimee is a romantic at heart and a southern transplant with a bit of the accent (but not a whole bunch). She's married to her high school sweetheart, and with him, she's produced three native North Carolinians, two of whom share the same DNA.

With an MBA and a degree in Applied Mathematics, there's absolutely no reason she should be writing romance novels. Then again, she shouldn't need a calculator to add two numbers, either ... but she does.

Silent Echoes is a "Games of Zeus" novel but it's not a traditional mythological conundrum. No, as the author, I’ve taken quite the liberties in creating a situation Zeus could have use to mess with we puny humans.

So, to have a little fun as Silent Echoes releases this month, my host here at My Guilty Obsession has challenged me to create a Game of Zeus out of Clue!

How could Zues use Clue upon two unsuspecting humans? How could he manipulate a seemingly inocuous game into a maniacal, devious relationship conflict? Oh, let me count the ways ... or rather, let me show you.

Clue
According to WikiHow (http://www.wikihow.com/Play-Cluedo/Clue)
Clue is a popular board game originally produced by Parker Brothers. The object of the game is to solve a murder. Who did it? With what weapon? In which room?

There are specific weapons, including the dagger, lead piping, revolver, rope, candlestick and spanner and specific places, including the ballroom, conservatory, study, lounge, dining room and kitchen. Guessing the ‘whodunnit’ is the key to the win. You guess wrong and you’re out. Guess right and you win!

Before we get to the ultimate Clue Romance ... let me tell you a little about Silent Echoes.

Book Description:
For years, Ian Sands has enjoyed his life as a bachelor, taking advantage of singlehood and exploring his own definition of passion�whoever she may be. Blonde. Brunette. Tall. Short. Hot. Not. Five months ago, all that changed.

Ian�s been celibate, frustrated and desperately seeking answers to why one woman, who doesn�t play by girls� rules, haunts his every waking moment.

As a renovations specialist, Taylor Marsh lives, works and breathes construction�a profession her southern belle of a mother would rather Taylor not touch. The same goes for Ian; Mama Marsh would never approve of him.

Like Ian, though, each time he and Taylor draw near, something compels her to get closer.

Something else tells her to run away.

As much as their histories suggest they shouldn�t be together, neither Taylor nor Ian can deny the pull, and the two succumb, indulging in a relationship that brings pleasure to body, mind and soul.

Doing so, though, also ushers in a series of events both should have foreseen as well as one final outcome neither expected.

And now ...
Clue
Yes, I know we�ve already done clue on another blog, but that�s okay, because just like a game, it�s probably never played twice the same way and Zeus wouldn�t use a game more than once if he didn�t have another way of manipulating the pawns.

Of course it would if everyone inside the book is a human. Zeus though, he�d thought of everything and the paranormal, supernatural types aren�t excluded from the options.

Let�s say, then that the players in this game are a human, a witch, a vampire and a werewolf - you know, all the conventional supes. Well ... right away, we know that while dead, a vampire is very much alive. And who is the best option for a vampire to team up with? The human of course.

So now we have our pairing and in playing the game, our human will find out he (or she) was the catalyst for the death of the vampire, whether that is ages ago and the human has been reincarnated or some other method.

Crisis of the heart ensues and while our friendly vamp there might be willing to pay back his killer, I�m sure the human isn�t going to be interested in being feasted upon. Thereinlies the next conflict. How do we get killer and the dead together? And have a happily ever after?

That�s what you�d have to read the book for!

And there you have it. What do you think? Is Clue a possible Game of Zeus?

MGO: Thank you so much Aimee for creating this wonderful guest post for us today!!

I started this without having read the first book in the series and while I don't think I really needed to read the first one, I probably should of just to get the background info on Tripp and Lexi and exactly was Zeus' Game was, but again, I don't think it was necessary. I never felt lost or confused as a lot of the info was stated again throughout the story.

I love stories about reincarnation and love that transcends time. It might be the hopeless romantic in me or maybe it just appeals to me because the stories are always so great, either way, I jumped at the chance to join in the blog tour for this one. Who doesn't love a good love story, mixed up with a centuries old mystery and the gods and goddesses of Greek time?

This was a fun story that kept me entertained and had just enough romance, paranormal and mystery to balance it all out. I never felt like one element overpowered the other.

I did guess early on who the culprit was in the story but that never detered me from enjoying it either and even though I was pretty sure I knew who it was, there were a few times that something would happen and then I had to question my choice.

I think the author did a great job with this, the characters were endearing and the plot entertaining. I would definitely pick up the next in the series.