Blog Tour and Book Review: The Trouble With Goodbye by Sarra Cannon 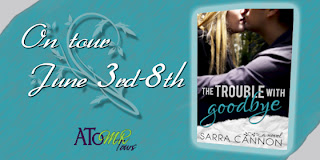 One night can change everything…

Two years ago, Leigh Anne Davis shocked everyone in tiny Fairhope, Georgia when she broke up with her wealthy boyfriend to attend an Ivy League university a thousand miles away. At school, she finds a happiness and independence she’s never known.

Until one terrifying night takes it all away from her.

With no place else to go, Leigh Anne heads home to reclaim her old life. A life she worked so hard to escape. On the outside, she seems like the same girl everyone has always known. But deep inside, she’s hiding a terrible secret.

That’s when she meets Knox Warner, a troubled newcomer to Fairhope. His eyes have the same haunted look she sees every day in the mirror, and when she’s near him, the rest of the world fades away. But being with Knox would mean disappointing everyone all over again. If she wants to save what’s left of her old life, she has no choice but to say goodbye to him forever.

*Amazon*Barnes and Noble*
About the Author:

Sarra Cannon grew up in a small town in Georgia where she learned that being popular always comes at a price. She is the author of the young adult paranormal Peachville High Demons series, which she first began self-publishing in October of 2010. Since the series began, Sarra has sold over 120,000 copies and recently signed a contract with Sea Lion Books to create a graphic novel adaptation of Beautiful Demons, the first book in the series. Sarra lives in North Carolina with her amazing husband, her new baby boy, and her teeny tiny Pomeranian, Snickerdoodle.
Website
Twitter
Facebook

My Thoughts and Review:
This is the first book by Cannon that I have read but I couldn't help it, it seems I am a sucker for the New Adult genre lately and I just can't get enough of it. And while this may have been my first book by her, it won't be my last. I, in fact, own several of her books and now I am wondering why it took me so very long to get to any of them. I really enjoyed this. Her writing style and the characters that she created.

Leigh Anne and Knox were very loveable and very real feeling. Neither were perfect and each had secrets in their past that haunted them in different ways. Both broken and both looking for that thing, that person, that dream that would help them become whole again, or at least as close to whole as they could possibly ever be again.

They couldn't have come from two more different backgrounds and families and yet they were so similar and both searching for the same thing and finding it in each other.

This really was a great story about sticking up for yourself, making some really hard decisions about what is right and what is wrong and not always choosing the easy way out. It isn't always easy doing the right thing, even when the right thing may hurt others and Leigh Anne was a pretty strong character. She had her moments of weakness but don't we all? I wasn't sure if she would do what was right but then again, she was always surprising me. Breaking away from her parents and trying to make a life on her own when everyone had such high, sometimes unrealistic expectations for her. She learned to stand on her own and I was proud of her for that.

Knox was a pretty amazing character himself. I really loved the compassion and love that he showed a complete stranger and I loved watching him open up and grow right along with Leigh Anne as they explored what the future held for them, if there was even a future for them together as friends, as lovers and as companions.

Cannon did a great job exploring some pretty hard topics and making all of Leigh Anne's choice very realistic and believable.