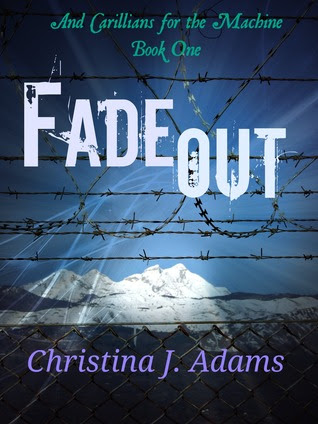 Title: Fadeout
Author: Christina J. Adams
Series: Book One in the Carillians For the Machines Series
Published: February 20, 2013
Genre: YA Dystopian
Source: Copy Provided by the Author (in exchange for an honest review)

Thirteen-year-old Silas fears the day when guards come and remove his memories leaving him an empty shell. He is trapped in the Cartiam, a human farm, and knows escape is not possible, but he can’t stop thinking about it. Especially when his older sister Malina is terrified her time will be coming soon. Ever since he was separated from his parents, Malina has taken care of him and now it’s Silas’ turn to protect her. He has to escape and take her with him.

But when the owner comes to visit, things go from bad to worse. Jamar, the owner’s son singles Silas out and the extra attention brings Silas under the owner’s microscope. The other kids in the Cartiam are unhappy with the way they are treated and rising emotions threaten to ruin all of Silas’ plans. Yet worst of all, Malina herself isn’t sure she wants to hang on. It is up to Silas to figure out the escape and fast. If he fails he could lose everything he loves.

Christina J. Adams finds inspiration in the green rolling hills and farmland surrounding her home in Maryland. She loves hanging out with children and teens and gets more excited about a new book coming out, from one of many favorite authors, that it’s probably not good for her health. She didn’t think being a writer was a serious profession until after high school, but has since decided it is the best career ever.

My Thoughts and Review:
Anyone who has read any one of Adams' books knows that they are unlike anything else out there. Full of imagination and originality galore.

Having said that, this one is no different. Adams takes us into a society ruled by classes, where some races are considered more dominate and powerful over the others. A hierarchy of sorts, where the bottom class are considered  nothing more than stock to be used and abused as they see fit for the rest of the worlds energy needs.

The story is told through the main point of view of Silas (lower class) and Jamar (upper class). These two are sort of thrown together and learn that things aren't always what they seem and not always what they were told to believe about one another and the classes.

While this is predominately told in Silas' point of view it was nice to have Jamar's as well. To see how the different classes are raised, treated and revered. We also get different glimpses of the outside world away from the Car.

While a lot is explained about the farms and what the boys and girls in the Cars are used for, there really isn't as much world building as I would have liked to see. I had many unanswered questions about what was going on and why the world was the way it was, how it cam about and why Silas was different from the other girls and boys with his emotions. Since this is only the first book in a planned series I can only imagine that more will be explained and revealed as the story and characters grow.

Overall this was a very interesting and entertaining read, it did have its slow moments but by the end of the story it did pick back up again and get more interesting. I can only imagine what Adams has in store for the rest of the series.