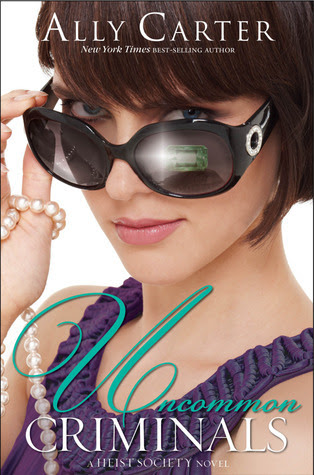 Book Description:
Katarina Bishop has worn a lot of labels in her short life. Friend. Niece. Daughter. Thief. But for the last two months she’s simply been known as the girl who ran the crew that robbed the greatest museum in the world. That’s why Kat isn’t surprised when she’s asked to steal the infamous Cleopatra Emerald so it can be returned to its rightful owners.

There are only three problems. First, the gem hasn’t been seen in public in thirty years. Second, since the fall of the Egyptian empire and the suicide of Cleopatra, no one who holds the emerald keeps it for long, and in Kat’s world, history almost always repeats itself. But it’s the third problem that makes Kat’s crew the most nervous and that is simply… the emerald is cursed.

Kat might be in way over her head, but she’s not going down without a fight. After all she has her best friend—the gorgeous Hale—and the rest of her crew with her as they chase the Cleopatra around the globe, dodging curses, realizing that the same tricks and cons her family has used for centuries are useless this time.

Which means, this time, Katarina Bishop is making up her own rules.

My Thoughts and Review:
I forgot how much I love Kat and Hale until I picked this one up and started reading it. I confess that I'm sad that it took so long for me to pick this series back up again because I really do love reading it and I always have fun whenever I pick up one of Carter's books.

I really love Kat. She is a criminal mastermind but in the case of this story, she is one of the good guys. I love how much Kat has grown from the first book and yet, how much she still hasn't. It fits her some how. It fits the storyline. Sometimes, the parts of her that haven't “grown up” were the parts that were the most frustrating, mostly because, I love Hale. He is probably one of my favorite characters in this whole series and I think he would be so great for Kat. I think he grounds her as well as pushes her to be better and do better and to never give up. Not that she is a girl that usually gives up. They are so opposite and yet, so much alike that I just think they would really work together, as friends, as partners and as lovers.

The fact that this had some history of Cleopatra's Emerald (and it's subsequent curse) made it even better. The history buff in me couldn't help but love it.

I loved meeting a new family member (who I adored!) and a very worthy opponent as well.

But mostly I am so glad that this had a whole lot of  Hale.

Don't get me wrong, I also really enjoyed seeing more of Gabrielle, the twins, Simon and we even get a little bit of  Nick.

Carter has managed to create a really fun series with a great cast of characters and plot line that kept me turning the pages and guessing until the very end.

Are they going to pull it off? Who are the good guys and who are the bad ? Who is Romani really and why is he (she?) so interested in Kat?


I really hope that Carter continues this series well beyond the three books currently out because it really is refreshing to read something so fun and entertaining with a punch of mystery, romance and done right shenanigans.

*All thought and opinions are my own and were not influenced by the publisher or author. I was not compensated for this review*