Review: The Coicidence of Callie and Kayden by Jessica Sorensen

Title: The Coincidence of Callie and Kayden 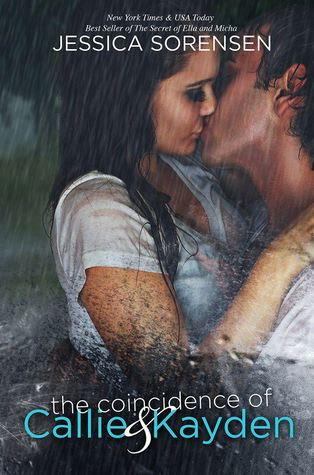 Luck was not on Callie’s side the day of her twelfth birthday when everything was stolen from her. After it’s all over, she locks up her feelings and vows never to tell anyone what happened. Six years later her painful past consumes her life and most days it’s a struggle just to breathe.

For as long as Kayden can remember, suffering in silence was the only way to survive life. As long as he did what he was told, everything was okay. One night, after making a terrible mistake, it seems like his life might be over. Luck was on his side, though, when Callie coincidentally is in the right place at the right time and saves him.

Now he can’t stop thinking about the girl he saw at school, but never really knew. When he ends up at the same college as Callie, he does everything he can to try to get to know her. But Callie is reserved and closed off. The more he tries to be part of her life, the more he realizes Callie might need to be saved.

If I had to sum up my feelings about this book, those words would work perfectly. Beautifully.

I can't really even begin to describe all the emotions that went through me as I read this incredibly real, incredibly raw story about two very hurt and broken people just trying to find reasons to live. Reasons to live each day and move on with their life. A reason to be happy, to let go and to be something and someone they never thought possible before.

Callie and Kayden felt so very real to me, so much so that my heart went out to them. I felt their pain, their loss, their struggles and their love. It was no secret from the very beginning what these two fought  through every day to survive.  Ms. Sorensen laid it all out there in the open from the very first chapter for the most part. Instead of keeping it all a mystery and leaving you wondering, she focused on the raw emotions that these two lost souls had to struggle with every single day and their battle to move on and to be strong and to really live again and maybe not just again but for the very first time ever. To feel something about each other that they never thought they were capable of. To find themselves in one another. To be stronger together than they ever could be apart.

This was a beautifully tragic story and I loved how strong both Callie and Kaysen were. How good they both were even though neither one of them knew it or believed it about themselves. They saw something in each other no one else ever did. In essence, they saved each other from a life of heartache and pain and it was lovely.

Luke and Seth are amazing secondary characters. Not only are they great characters but their friendship and love for Callie and Kayden are what friends should be. They have each others backs, they help each other and they support each other, especially Seth. So many times I wanted to reach through the pages and high five him. He offered Callie so much love and support it was amazing, not to mention he was the humor this story needed so it never got too dark or depressing. I really hope in the next book they both play as big of a role as they did in this one, it would be a shame if they didn't.

The ending is a killer and it made me so very thankful that I have the next book in the series to read so that I can find out what happens next and I am also glad that it isn't the end of their story, of their growth and their love. I want see them blossom and shine.

I can't wait to see what is in store for them next. I know it will be as equally heartbreaking and beautiful as this one was.


Once again Ms. Sorensen has shown me why I love her books so much and why I will continue to read them and buy them.