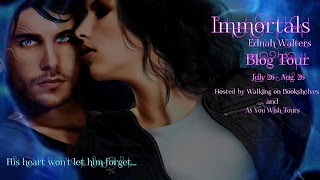 Book Description:
Nothing can stop Raine Cooper when she wants something…

Raine finally knows that her gorgeous neighbor, Torin St. James, is a legend straight out of Norse mythology but that doesn’t stop her from falling hard for him. Torin is crazy about Raine too, breaking the one rule he lives by: Never fall for a mortal. The problem is he no longer remembers her or that she saved him by making a deal with Norns—Norse destiny deities—the same Norns who have now erased his memories of their past together to punish her.

So Raine comes up with a plan...

She will make Torin forget his one rule a second time and fall in love with her all over again. But before Raine can put her plan into action, the Norns return. This time, they demand she protects Eirik Seville, her best friend since childhood, from an evil so dark even the Norns are scared.

But you know what they say about well-laid plans…

Caught between protecting Eirik and convincing the stubborn, cocky Torin St. James that the two of them are meant to be together, Raine's life slowly unravels. Friendships are tested. Enemies become allies. Desperate, Raine makes choices that could not only tear her and Torin further apart, but lead to the destruction of everything and everyone she loves.


About the Author:
Ednah is the author of The Guardian Legacy series, a YA fantasy series about children of the fallen angels, who fight demons and protect mankind. AWAKENED, the prequel was released in September 2010 with rave reviews. BETRAYED, book one in the series was released by her new publisher Spencer Hill Press in June 2012 and HUNTED, the third installment, will be released April 2013. She’s working on the next book in the series, FORGOTTEN.

I loved Runes and was eagerly awaiting the arrival of Immortals so I could jump right back into Raine's world. I was heartbroken over the way Runes ended and couldn't wait to get more Torin and to see what happened next. I was expecting this to be great, what I wasn't expecting was to love it even more than the first. I couldn't put this down it is that good.

Once again Torin was simply amazing and I loved him even more. He is the same cocky arrogant bad boy but his sweet loving protective side comes out so much more in this that you can't help but love him. If you thought he was hard to resist in Runes, just wait, he will steal your heart and take your breath away.

So much happens that I don't even know where to begin or what I can say that won't give the whole thing away. We get more Andris, Cora, Eirik, Raine, Torin and a few more people as well. Not only are all the characters better than ever but there are quite a few surprises with them and for them along the way.

To say this was better than the last would be an understatement. If I hadn't already loved and devoured the first book in the series this one surely would have left me hooked and quickly pushed it up my list of favorites.

Raine is truly coming into her own and no longer the shy slightly awkward girl she was at the beginning of Runes. She takes action when action is needed and doesn't take no for an answer. She goes after what she wants and what she needs and becomes all the stronger for it. In a world full of things and people she still does not understand nor trust, she struggles to survive and protect those she loves and cares about while still being the person she wants to be.


She pulls through this one shinning. Determined to hold on to those she loves and to be the best she can be, the girl kicks butt and takes names and I loved reading about ever minute of it.

Ms. Walters once again proves that she can write and why this series is such a fantastic one. I will forever read what ever else she has in store for Raine and Torin and all the Immortals.

*All thoughts and opinions are my own and were not influenced by the author, publisher or touring company. I was not compensated for this review*