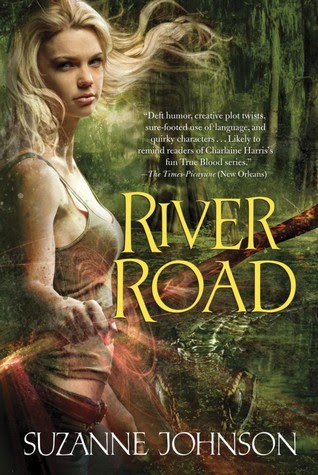 Book Description:
Hurricane Katrina is long gone, but the preternatural storm rages on in New Orleans. New species from the Beyond moved into Louisiana after the hurricane destroyed the borders between worlds, and it falls to wizard sentinel Drusilla Jaco and her partner, Alex Warin, to keep the preternaturals peaceful and the humans unaware. But a war is brewing between two clans of Cajun merpeople in Plaquemines Parish, and down in the swamp, DJ learns, there’s more stirring than angry mermen and the threat of a were-gator.

Wizards are dying, and something—or someone—from the Beyond is poisoning the waters of the mighty Mississippi, threatening the humans who live and work along the river. DJ and Alex must figure out what unearthly source is contaminating the water and who—or what—is killing the wizards. Is it a malcontented merman, the naughty nymph, or some other critter altogether? After all, DJ’s undead suitor, the pirate Jean Lafitte, knows his way around a body or two.

It’s anything but smooth sailing on the bayou as the Sentinels of New Orleans series continues.


My Thoughts and Review:
I would be lying it I said that a huge appeal for starting this was to get more Jean time because the simple truth is, I can't help myself, I love the darn naughty pirate and I was eager to see more of him and to get more of his story. Not that DJ and Alex aren't great, because they are but there is just something about Jean Lafitte that is just hard to resist. Hard not to love, dead or not. Of course, I'm not the only one that seems unable to resist him.

And of course I needed to know more about Jake as well. I was heartbroken at how the first book ended and not really knowing his outcome. I am so happy that although this takes place a few years after the first one ended (about three) all of my favorite characters were still present and accounted for. And not only did it have all my old favorites but some great new characters as well and some very intriguing surprises.

Oh boy did Suzanne not let me down with this one. It had everything in it I loved about the first book and then some. I would go as far as to say I enjoyed this one much more than I did the first. I know I am only two books into this series but I can quickly see this one becoming a favorite. I love all the characters so much. Jean had all his usual (sexy) pirate charm, Alex was Alex as always (come on, you know he is sexy too!) and then there was sexy Jake as well. The good ole' southern boy now struggling with his new situation and position in New Orleans. I really felt for him, I really did.

So much happens in this, so many fun adventures, discoveries and kick butt action as always and we even get a little bit of romance, maybe not as much romance as I would have liked but the possibilities there are endless. And if I am being honest, I really could see and would  love whomever DJ picks because all the guys are amazing and even though I talk about Jean a lot (come on, sexy suave pirate here!) I really do love Alex and Jake as well and just as much.

I already knew I loved Suzanne's writing after falling in love with her Penton Legacy (under her pen  name, or maybe this is her pen name?) series and now I can say I have fallen in love with this series as well. She is such an amazing writer and never fails to draw me into the worlds that she has created and get completely lost in them and even though the two series are very much different they are both fantastic and I can't praise them or her writing enough.


I can not wait to read Elysian Fields! I am dying to know more, learn more and discover what else DJ can do with her elven magic and of course I need to know more about Rand and all the mystery behind his sudden appearance in her life. I have my guesses about who and what he is but I can't wait to see what they really are and what Suzanne will throw out there. I know there are many more twists and turns, heartaches and romance on the horizon and I can't wait to read about them.