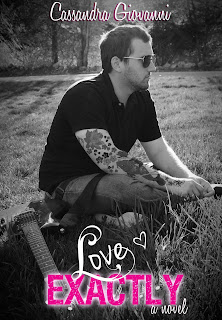 Emma Walker was a writer who'd lost herself to someone else's anger--who had given up on ever feeling like herself again.
Evan Levesque was a rock-god--the one all the woman wanted, but he'd never gotten used to the loneliness between the stage and real life.
With just one cup of coffee they'll begin a journey of self-discovery at each others sides, but can Emma handle Evan's fame while dealing with her own demons? Emma's checkered personal past, a bad relationship that haunts the edges of her memories, threatens to make everything implode on them when Evan takes matters into his own hands.


Sticks and stones may break my bones, but your words...they'll destroy my soul--Can Emma handle being put back together and facing who she's become because of it?

Cassandra doesn't remember a time when she wasn't writing. In fact, the first time she was published was when she was seven years old and won a contest to be published in an American Girl Doll novel. Since then Cassandra has written more novels than she can count and put just as many in the circular bin. Her personal goal with her writing is to show the reader the character's stories through their dialogue and actions instead of just telling the reader what is happening. In 2012 she became a published Young Adult author, releasing In Between Seasons (The Fall, #1) and Walking in the Shadows. In 2013 she branched out by using her artistic illustrating talents to publish her first Children's novel, The Adventures of Skippy Von Flippy: Tales of Friendship (Skippy Tales, #1). Cassandra will also release her first New Adult novel, Just One Cup, in the Spring of 2013.

Cassandra is a freelance professional photographer known for her automotive, nature and architectural shots. She is the owner of Gio Design Studios, a photography and publication marketing company that designs covers and marketing materials for authors utilizing the company's photography. She is currently studying to receive a degree in Marketing. Cassandra is happily married to the man of her dreams and they live in the rolling hills of New England with the other loves of her life their dogs, Bubski and Kanga.

As an author it’s so hard to choose just one scene that is my favorite. I really enjoyed writing this entire book! I couldn’t figure out if my favorite scene is a serious scene or a funny scene, or even because they were so tough for me to write, a sexy scene. I decided on a serious scene that was a really telling one for the character’s personalities and their growing feelings for one another. There’s a little bit of humour as they talk about Evan’s tattoos, but it very quickly becomes serious. I love the actions in the scene, Emma tracing Evan’s tattoos--Evan’s serious composure--the waves in the background. The thing I love the most of all is the last sentence. Perfection!

I traced the outline of the beads on his neck showing through his v-neck t-shirt. "What does this symbolize?"
"Prayer beads."
I let my fingers follow the line of his vein down his shoulder, over the flowers that dotted his upper arm and down to his forearm. I turned it so I could trace the lion on the inside. "And this?"
"Lions are bad ass."
"Seriously?"
He shrugged. "Unfortunately, not every tattoo I have has a meaning."
"The roses?"
"My mom's favorite flower. I know it's not original," he commented as he took my hand and put it over his heart where the roses were. "But after everything my parents went through with me I wanted something to symbolize them."
"Everything they want through?" I asked as I let my fingers fan out across the shape of his chest muscles before bringing them back up and playing with the tips of his hair that were beginning to curl.
"I left home when I was sixteen to record our first album, went on tour at seventeen, and started tattooing the crap out of myself at eighteen. I know I'm successful, but I can't say I think this was what my parents wanted."
Evan had moved his head so he was staring out at the ocean. I watched as the waves reflected in his eyes and his chest heaved with a deep outlet of breath.
"I'm sure they're proud of you," I tried to reassure him, but I could tell from the way his jaw tightened that this was something he had been dealing with for a long time.
His eyes met mine and he reached up to touch my face. "I know...but it doesn't change the fact I was their only child, and I abandoned them for a life they never approved of."
"I'm not an excellent poster child for things parents approve of either. There's so much guilt I deal with day to day. I know that I hurt them," I explained, my voice diminishing to a cracking whisper that was only just audible against the sound of the waves.  I closed my eyes, unable to bear the look on his face as I admitted, "What's worse is the anger I feel at myself for it."
I felt Evan get up and kneel in front of me, pulling my face to his own. I concentrated on the touch of his rough fingertips, the smell of his heady Axe cologne and then the feel of his forehead as it pressed against mine while I tried to calm my breathing.
"Tell me something..." his voice drifted with the waves; "tell me why it feels like you're a part of my soul?"
I opened my eyes to look into his, watching as the yellow around his iris darkened to a burnt orange and the brown faded to a muted green.
"Because you're a part of mine."

My Thoughts and Review:
It is no secret that I love this genre and read as much of it as I can and although I love it, I can only take it in small doses because of all the angst and emotions they usually portray and bring out in me.

So it was with a sense of relief when I finished this one that I realized it was quite unlike a lot of books in this genre in the fact that even though Evan and Emma had issues and things to deal with, one thing about them that didn't change, that didn't waver, was their relationship. Never once was it filled with the drama and angst that is usually associated with this genre and I loved it for that. It was a nice change of pace. And not only did I love the drama free relationship aspect this still felt right. Evan was a rock star and he tried to shield Emma from that as much as possible but just because he was a rock star, Emma didn't jump into bed with him and give him whatever he wanted. They took their relationship slow and became friends first and I loved that. They worked through their demons together and grew stronger not only as a couple because of it but as individuals as well and that was the beauty of the their story, the beauty of the writing within the pages.

Giovanni came up with something that while not completely unique or even something all of us can relate too (dating a rock star) she put real emotions and issues that we can relate to. Fears, demons, past relationship drama, insecurities, trust issues, first love, friendship and so much more. She put a spin on it that was so sweet and real feeling that you couldn't help but fall in love with Evan and Emma's story and root for their love and their relationship to work and to last.

I literally read this in one sitting and just couldn't get enough of it. I was a little sad to see it end but very happy with the ending when it did come. I closed the book with a sigh and a smile on my face and couldn't of asked for more.

*All opinions and thoughts are my own and were not influenced by the author or publisher. I was not compensated for this review*

Giveaway:
*giveaway sponsored by the author as part of the blog tour*