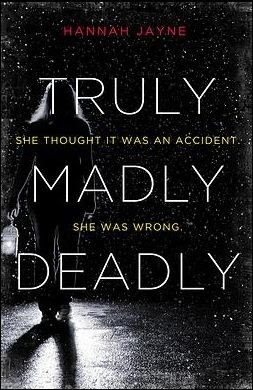 
Book Description:
Sawyer Dodd has it all. She's a star track athlete, choir soloist, and A-student. And her boyfriend is the handsome all-star Kevin Anderson. But behind the medals, prom pictures, and perfect smiles, Sawyer finds herself trapped in a controlling, abusive relationship with Kevin. When he dies in a drunk-driving accident, Sawyer is secretly relieved. She's free. Until she opens her locker and finds a mysterious letter signed by "an admirer" and printed with two simple words: "You're welcome."

About the Author:
Hannah is the author of the UNDERWORLD DETECTION AGENCY CHRONICLES from Kensington books and the upcoming young adult thrillers TRULY, MADLY, DEADLY and SEE JANE RUN available from Sourcebooks, Inc. When she's not battling the demons of the Underworld or tackling a murderer at Hawthorne High, Jayne kicks her feet up in her San Francisco bay area home and attempts to share couch space with two enormous cats.

The slightly dark, depressing opening of this book and the creepy letters found in Sawyer's locker shortly after her boyfriend's funeral sets the tone for this whole story.

Constantly guessing who is leaving Sawyer the cryptic notes, what they mean and who is behind all the mysterious accidents of her loved ones, puts you right into the thick of it all leaving you on edge and ready to find out whodunnit.

I have to say, I was so very wrong on who I thought the culprit was. I went back and forth and still wasn't ever 100% sure I was right until the very end. The author did an amazing job with keeping the suspense throughout the story and keeping me guessing.

I really liked Sawyer, Connor, and Logan and was constantly wondering if Sawyer was crazy or if one of her friends were behind the notes and accidents happening around her. I never completely warmed up to Sawyer but I did like her and I felt for her and the situation with her boyfriend. I do wish we would have gotten a better glimpse into Kevin. When did he start with the abuse and how long was it going on for? It isn't exactly glossed over but it certainly isn't a huge part of the story either but it does flash back once in a while to scenes throughout their relationship enough times that I just wish the author would have given us just a little more on it.

Overall this was a light mystery with slight creepy factors that had me loving it and guessing what twist was around the next corner.