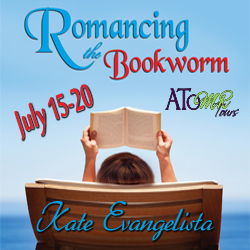 Book Description:
Sometimes, even the best-laid plans can unravel.

It's spring break, and Tamara Winters would rather stay on campus and read romance novels than flaunt her size-fourteen body on a beach. But her best friend, Ronni, has other ideas. Against her wishes, Tamara is whisked away to picturesque Maverick Bay, where she's wrangled into waiting tables with Ronni at the Shore Shack for its busy week leading to Maverick's Surf Invitational. There she meets fellow schoolmate Xavier Solomon, the Invitational's organizer and campus womanizer by reputation. From the moment Tamara sees him emerging from the waves like a hero in of one of her romance novels, all she wants to do is run away from the feelings he inspires in her.

Little does she know Xavier has been watching her for weeks now. In fact, after failed attempts at asking her out on campus, he's concocted a crazy plan: fabricating romantic situations straight out of her favorite books. Xavier quickly realizes that if Tamara gets a whiff of his designs, he might as well spell CREEPER across his forehead. Yet as they grow closer, he's convinced it's a risk worth taking. What he hasn't planned on, of course, is his drug-addicted, alcoholic stepbrother, who decides to join the fun and put a wrench in Xavier’s scheme.


Spring break is proving hotter than Tamara expected. Will her romance novels be able to compete?

When Kate Evangelista was told she had a knack for writing stories, she did the next best thing: entered medical school. After realizing she wasn't going to be the next Doogie Howser, M.D., Kate wandered into the Literature department of her university and never looked back. Today, she is in possession of a piece of paper that says to the world she owns a Literature degree. To make matters worse, she took Master's courses in creative writing. In the end, she realized to be a writer, none of what she had mattered. What really mattered? Writing. Plain and simple, honest to God, sitting in front of her computer, writing.

My Thoughts and Review:
You really need to go into this one with the simple idea that you are going to have a fun, fluff read. If you do that then you will really love this story. If you are expecting more than that then you might be disappointed. However, just because this is what I consider a fluff read, it doesn't mean it isn't well written, engaging or that the characters aren't loveable because this story is all of those things as well. But really there is more to this read than just fluff. In fact this read was quite naughty, more so than I was expecting, which was both good and bad. I could have done without some of the scenes that were in it but I appreciate what the author was trying to achieve in recreating scenes from some of Tamara's books, heroes and heroines.

There is no way I couldn't love Tamara, well maybe not love but certainly like, after all she is a girl after my own heart. A girl that loves to read and loves her romances and sometimes gets so caught up in her book worlds that she forgets about the real world around her. I think any book lover can really relate to her, at least I know that I could. I can't even count how many times I have gotten so caught up in a good story that I completely ignored the world around me, stayed up way too late to finish it and put off all other things to finish it and this was Tamara's life, her passion and in doing so, also her crutch. But there were reasons for the way that she was and I loved getting down to those deeper darker parts of the story to discover them.

I loved Ronni, Hudson and Xavier too. They were all great but I have to say, that for me, Zander stole the show. And before you start thinking love triangle, rest assured, there are no love triangles in this story. It was just that out of all the characters that really had depth to them, Zander seemed to be the one with the most and unfortunately the one we get the least information about. I liked Tamara and Xaviers story but I couldn't help wanting all of Zander's story as well. I am actually hoping that there will be a sequel and it will be all about the bad boy Z because I want to get into that boy's head and see what makes him tick.

Overall this was a good story with lots of naughty bits and a sweet story to boot with  a great story about friendship, living the world for all its worth and remembering to not hide behind things, people and books when the going gets tough.

*All opinions and thoughts are my own and were not influenced by the author, tour host or publisher. I was not compensated for this review*