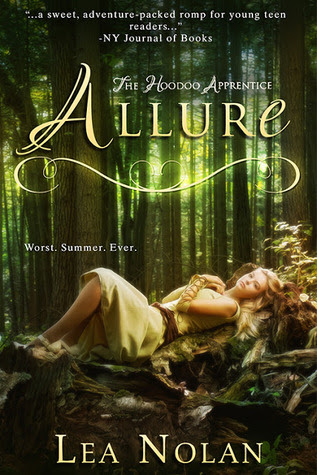 Emma Guthrie races to learn the hoodoo magic needed to break The Beaumont Curse before her marked boyfriend Cooper's sixteenth birthday. But deep in the South Carolina Lowcountry, dark, mysterious forces encroach, conspiring to separate Emma and Cooper forever. When Cooper starts to change, turning cold and indifferent, Emma discovers that both his heart and body are marked for possession by competing but equally powerful adversaries.


Desperate to save him, Emma and her twin brother, Jack, risk their lives to uncover the source of the black magic that has allured Cooper and holds him in its grip. Face with the horror of a soul-eating boohag, Emma and Jack must fight to resist its fiendish power to free Cooper long enough to join their strengths and face it together, before it destroys them all.


My Thoughts and Review:
Allure picks up right where Conjure left off, with Miss Delia returning home from the hospital and Emma, Jack and Cooper still trying to figure out how to break the curse that plaques Cooper's family.

To say that I liked this even more than Conjure would be an understatement. I liked Emma, Jack and Cooper in the first book but I really started to fall in love with them after reading Allure.

Nolan amps it up with the hoodoo lore, the mystery, the creep factor and the friendship between all three characters. Not to mention the simple fact that Emma's character grows a ton, both in maturity and also in her strength as a character, friend, sister and apprentice to Miss Delia (who I still adore!).

The writing was better, the plot thicker and the suspense even more dramatic all while still keeping this a clean fun read that is perfect for any age group.

It was hard seeing Cooper change as the curse and his birthday drew near and my heart went you to Emma but once again she shows up just how loyal and good she really is.

The bad guys are even more terrible than before and things start to get downright hard for Emma and Miss Delia as they try to deal with it all. I really loved the relationship between the feisty Miss D and Emma. It was both enduring and heartwarming to watch them interact with one another and see how close their bond and respect for one another has grown through the books and storyline.


There were some unexpected turn of events that left me feeling a little sad but also very eager for the next installment.