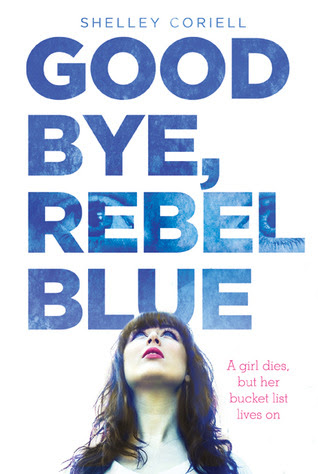 Book Description:
Rebecca Blue is a rebel with an attitude whose life is changed by a chance encounter with a soon-to-be dead girl. Rebel (as she’s known) decides to complete the dead girl’s bucket list to prove that choice, not chance, controls her fate. In doing so, she unexpectedly opens her mind and heart to a world she once dismissed—a world of friendships, family, and faith. With a shaken sense of self, she must reevaluate her loner philosophy—particularly when she falls for Nate, the golden boy do-gooder who never looks out for himself. Perfect for fans of Jay Asher’s blockbuster hit Thirteen Reasons Why, Coriell’s second novel features her sharp, engaging voice along with realistic drama and unforgettable characters.


My Thoughts and Review:
Have you ever meet those protagonists that are so snarky, so filled with attitude that for some reason only you can decipher, you instantly fall in love with them just for the plain reason that they feel so real to you that you can't help but like them?

Enter, Rebel. If her name wasn't a big enough hint as to the type of person she is, then the description above should have been. She is everything I love in a good protagonist. And her story begins in study hall, with an assignment to write out a bucket list and a girl named Kennedy Green who changed everything.

I read a lot of YA and this one really did stand out. Without sounding too cheesy, it called to me and I could totally relate to Rebel even though we are nothing alike and my heart went out to her. Sometimes self discovery is hard and painful not an easy road but I have to give Rebel credit, she took it like a champ and she stretched and grew and it was beautiful.

Coriell managed to create a character that was strong, determined, feisty, snarky and filled with attitude. But one that was still soft enough to discover the goodness around her and all that she had been missing from hardening her heart from those that cared about her. She learned to be herself but to be a better self without losing anything that made her Rebel and that is such a beautiful message for anyone and one for everyone.


“You don't need anyone to make it in this world, the power to be extraordinary comes from within.”