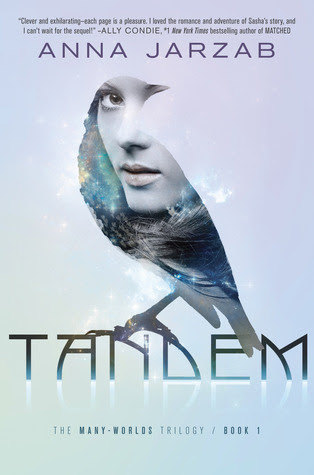 Title: Tandem
Author: Anna Jarzab
Series: Book One in the Many-Worlds Trilogy
Published By: Delacorte (October 8, 2013)
Source: ARC Copy Provided by the Publisher (in exchange for an honest review)
Genre: YA Sci Fi/Fantasy
My Rating: 3 Stars!

Book Description:
Everything repeats.
You. Your best friend. Every person you know.
Many worlds. Many lives--infinite possibilities.
Welcome to the multiverse.

Sixteen-year-old Sasha Lawson has only ever known one small, ordinary life. When she was young, she loved her grandfather's stories of parallel worlds inhabited by girls who looked like her but led totally different lives. Sasha never believed such worlds were real--until now, when she finds herself thrust into one against her will.

To prevent imminent war, Sasha must slip into the life of an alternate version of herself, a princess who has vanished on the eve of her arranged marriage. If Sasha succeeds in fooling everyone, she will be returned home; if she fails, she'll be trapped in another girl's life forever. As time runs out, Sasha finds herself torn between two worlds, two lives, and two young men vying for her love--one who knows her secret, and one who thinks she's someone she's not.

The first book in the Many-Worlds Trilogy, Tandem is a riveting saga of love and betrayal set in parallel universes in which nothing--and no one--is what it seems.


My Thoughts and Review:
Normally I would say that this sort of read just isn't something I pick up willingly. I normally don't gravitate towards sci fi and fantasy reads but lately, lately, that isn't the case at all. In fact, I am pretty sure I can no longer claim to shy away from the two genre as it seems I suddenly have great interest in them and in fact have been loving what I have tried for the most part.

I don't even know why I shy away from it because some of my favorite shows and stories growing up were in the two blended genres, with anything having to do with time travel high on the list.

And really, how could I resist that cover? You have to admit, it is pretty eye catching and all around great. This also happens to be my first book by Jarzab and I can say without fail or falter that is won't be my last even though I didn't fall in love with  the storyline, I did really enjoy it.

I think the biggest thing is that I loved Thomas and Callum (and yes, sorry girls, there is a bit of a love triangle going on) but sadly, I didn't love Sasha. She seemed to fragile at times and then other times she was strong and took charge but there were way too many fragile moments for my liking. I think it was those weak moments that made her appear more whinny than I am sure the author intended for her to come off as. It is no secret that I like a strong heroine who will take charge and kick butt and Sasha just wasn't her.

The world building was nicely done explaining Earth, Aurora, the Tandem and analogs for the most part and there were lots of twists, especially towards the end so it did keep me entertained.

Would I continue one with the series? I think I would, it would be nice to see where it went from here but it wouldn't be high on my priority list but again, I would love to try another book from this author because I did enjoy her writing style.