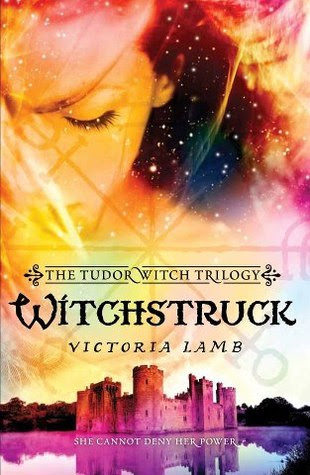 Author: Victoria Lamb
Series: Book One in the Tudor Witch Trilogy
Published By: Harlequin Teen (September 24, 2013, although first published on July 5th by Corgi Childrens)
Source: ARC Copy Provided by the Publisher (in exchange for an honest review)
Genre: YA Historical
My Rating: 4 Stars!

Book Description:
Meg Lytton has always known of her dark and powerful gift. Raised a student of the old magick by her Aunt Jane, casting the circle to see visions of the future and concocting spells from herbs and bones has always been as natural to Meg as breathing. But there has never been a more dangerous time to practise the craft, for it is 1554, and the sentence for any woman branded a witch is hanging, or burning at the stake.

Sent to the ruined, isolated palace of Woodstock to serve the disgraced Elizabeth, daughter of Henry VIII and half-sister of Queen Mary, Meg discovers her skills are of interest to the outcast princess, who is desperate to know if she will ever claim the throne. But Meg's existence becomes more dangerous every day, with the constant threat of exposure by the ruthless witchfinder Marcus Dent, and the arrival of a young Spanish priest, Alejandro de Castillo, to whom Meg is irresistibly drawn - despite their very different attitudes to her secret.

Thrilling and fast-paced, this is the first unputdownable story in a bewitching new series.


My Thoughts and Review:
It has been a long time (too long) since I read a good historical book and one that has a paranormal element truly is one straight after my own heart, which is why I was so very excited to start Witchstruck. It is set during the reign of Queen Mary, when Princess Elizabeth was still considered a threat to the throne and imprisoned for the wrong doings of her mother, Anne Boleyn. The very fact that Anne was accused of being a witch, tried and beheaded has always been a dark spot in the English rule. One where conspiracies were around every corner and deception and deceit ran rampant in the royal court. A time when no one could be trusted and everyone was viewed as an enemy.

I don't even know where to begin to describe just how much I truly loved this. Way more than I was expecting and hoping for. I got just the right amount of historic detail to make the history nerd in me smile and the right amount of the paranormal element to make my supernatural side shine.

Meg was a great character, brave and headstrong and not afraid to laugh in the face of danger. She is a witch during a time that was very danger to be one. Where deaths by hanging, fire, beheading, and drowning were a natural order of things. Where anyone and everyone could (and were) accused of being a witch simple because they felt wronged by another and it was accepted without a second thought and where those trials were rarely fair.

Elizabeth is a strong character. Wrongly accused of being a traitor to the throne and still dealing with the wrongful death of her mother, having her title and position stripped away from her by her vengeful  half sister Queen Mary, she isn't one who shies away from getting what needs to be done done in order to regain her position and favor to the queen, even if that means using witchcraft from Meg as an advantage.

The sweet romance was another added bonus. Sweet enough to make you smile but not so overpowering that it took away from the real story and matters at hand. Alexandro was a great leading man and one that was also strong enough to accept Meg for what she was even though it went against all that he had been taught and respected.


I really look forward to continuing with this series. There really aren't enough historical reads in the YA genre and it is so refreshing to see one that is not only based on actual facts, events and people but one that is also different enough to add other paranormal elements that are so popular right now in this genre and still make it believable.