Review: Made of Stars by Kelley York

Title: Made of Stars 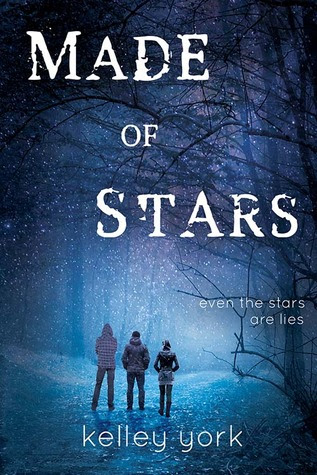 
Book Description:
When eighteen-year-old Hunter Jackson and his half sister, Ashlin, return to their dad’s for the first winter in years, they expect everything to be just like the warmer months they’d spent there as kids. And it is—at first. But Chance, the charismatic and adventurous boy who made their summers epic, is harboring deep secrets. Secrets that are quickly spiraling into something else entirely.

The reason they've never met Chance’s parents or seen his home is becoming clearer. And what the siblings used to think of as Chance's quirks—the outrageous stories, his clinginess, his dangerous impulsiveness—are now warning signs that something is seriously off.


Then Chance's mom turns up with a bullet to the head, and all eyes shift to Chance and his dad. Hunter and Ashlin know Chance is innocent...they just have to prove it. But how can they protect the boy they both love when they can’t trust a word Chance says?


My Thoughts and Review:
This is my first Kelley York book even though I own more than one of her other stories. For some reason, out of all of them, this one just called out the most to me and I knew that it would be one that wouldn't sit in my TBR pile for way too long and be forgotten about, one that needed to be read now and so..I did.

For some reason going into this I thought it was about two sisters falling in love with the Chance, not a brother and sister so, I have to admit, that really threw me for a loop. I guess I didn't read the description well enough before beginning, which of course it purely my fault. Having said that though, I was slightly disappointed that wasn't what I was getting, that in fact, I was getting an entirely different story all together.

Having said all of that though, the writing was beautifully done, the story was beautifully done. Tragic and sad and completely unexpected. I can see why others rave about the author's ability to suck you into a story and make you think about it for days after and even though this wasn't my cup of tea, I completely appreciate the author's talent and ability to tell a story that doesn't always end wonderfully. That is in fact, heartbreaking and gut wrenching. With lies and deceit and deception around every corner that I honestly didn't see coming, it pretty much blew me away and left me reeling and at a loss as how to process it all.


For that alone I can't rate this anything less than 4 stars simply because the girl can tell a story and tell it well.