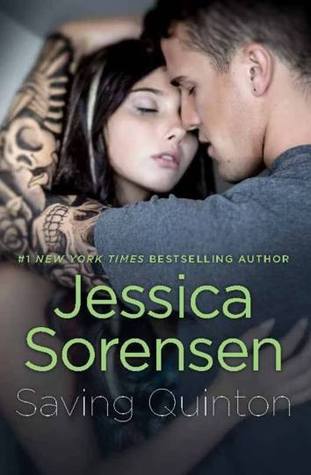 
Book Description:
Nova Reed can't forget him-Quinton Carter, the boy with the honey-brown eyes who made her realize she deserved more than an empty life. His pain was so similar to her own. But Nova has been coming to terms with her past and healing, while Quinton is out there somewhere, sinking deeper. She's determined to find him and help him . . . before it's too late.

Nova has haunted his dreams for nearly a year-but Quinton never thought a sweet, kind person like her would care enough about a person like him. To Quinton, a dark, dangerous life is exactly what he deserves. And Nova has no place in it. But Nova has followed him to Las Vegas, and now he must do whatever it takes to keep her away, to maintain his self-imposed punishment for the unforgivable things he's done. But there's one flaw in his plan: Nova isn't going anywhere . . .

After feeling so despondent and rung out from Breaking Nova, I almost, almost, didn't want to even pick this one up. Breaking Nova, tore my heart out and mangled it. I ached for Quinton and I was in anguish over what would become of him. How could the ending have been so brutal and so hard to live with? Why couldn't I get him out of my head?

I knew if I picked this up that once again my heart would be ripped out and stomped on, more than likely, more than once but I did it anyways. Oh why must I torture myself with these hard realistic, heartbreaking reads?

Because, simply put, the writing and the journey make it all worth it, oh yes, they do. And Sorensen knows how to write them. So raw and gritty and sometimes you are so put off and disgusted by what happens to those beautiful characters that she writes, that even though you love her for her writing and having  created them in the first place, you can't help but hate her for all the pain she puts them through as well.

And just like I suspected from the very beginning this wasn't an easy read. Once again it was gut churning and sad and there was a lot of heartache along the way for all involved. It was gritty and some scenes left me feeling dirty and in need of a good shower simply because I could so vividly see Quinton's surroundings and the living conditions he was in. It was awful.

There are some tough situations and scenarios and unfortunately not a whole lot of happiness or light moments, in fact, I think this might have felt darker than the first one. But the writing was captivating and real if not raw feeling.

Truly my heart broke for everyone and my only real complaint was the ending. Where was my happily ever after? Was that really how it ended? Is there going to be another one, because dang it, there better be. I did not put that much time, emotion and feeling into this to be left hanging like that. I don't even know what to think other than once again I am left wishing that I would have waited to start this one until all the books were out. Until I knew for sure that it had an ending or maybe even a beginning for Quinton and Nova.

Am I disappointed? No, not really, just anxious for the next and anxious for all to have their happily ever after like I so desperately want them to have.