Only In Her Dreams Blog Tour, Giveaway and Book Review! 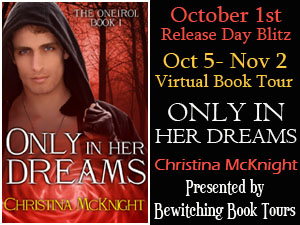 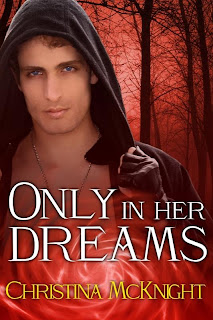 Only in Her Dreams
Book One of the Oneiroi Series
Christina McKnight
Release date: September 30, 2012

When Lucessa Sarcona awakes from a recurring dream, she has no idea her life is about to be turned upside down. A stranger, familiar to her dreams, shows up in the flesh, and Lucessa knows she’s either crazy or experiencing something not of this world.

A war ensues between three demigod brothers. One, trained to rule Erebos, is violently replaced. One forced to return to his homeland and lead the dream-gods of the Oneiroi. And one is charged with the impossible task of protecting Lucessa. How is she linked to the Oneiroi? Why do two brothers seek to keep her hidden and protected? And how does another plan to use her against the two demigods who love her?

Will Lucessa’s dream man have the courage to claim her as his own or will he bow to the command of another, forsaking the one he loves?Only in Her Dreams is a modern spin on a Greek legend--the new direction of Urban Fantasy and Paranormal Romance, moving from angels, demons, vampires, and witches and toward the realm of demigods.

Lucessa stared at her bed. It was time to sleep again, but it was getting harder to succumb to it. She started to think the day would never come when she could abandon herself to sleep without the feeling of being watched. He was always there--haunting her dreams. Her dreams hadn’t been her own in such a long time.
He was always there. Never talking but always watching. Intently. As if he knew her. Security, even in sleep, eluded her.
She’d lost her father and her husband. Her mother was slipping away, battling a memory loss that was progressing daily. Her dreams were the only place she could remember a family, someone who cared. But he insisted on intruding. Every happy memory and every nightmare included his presence. Why did he always show up? How could she get rid of him?
Lucessa tried for the millionth time to find a solution as she climbed under the covers. Who am I kidding? There was nothing she could do. He was a dream! A figment of her imagination. She sighed and resigned herself to another restless night.

Lucessa was a child again. The cold, pine-scented wind tangled her hair as she descended the mountain path in front of her parents. Her family’s annual summer camping trip to Yosemite National Park was in its third day, and that meant they’d conquered Half Dome for the third year straight. Ever since her parents deemed her old and skilled enough for the challenge, they hiked it together. As a family.
She looked back at her smiling parents as they held hands and strolled down the path after her. Her mother, Marie, looked casual in her jeans and the blue “Keep Lake Tahoe Blue” shirt that hugged her frame. Her father wore a San Francisco Giants baseball cap, a wisp of salt and pepper hair showing through. They looked like a couple out of the travel magazine that Lucessa had seen in her father’s study weeks ago.
“Dear, watch where you’re going!”
Lucessa turned back to the trail, nearly colliding with a man lounging against a tree just off the path. Dressed in a thigh-hugging pair of dark pants and a billowy tunic that had to be from at least a century ago, he pushed off the tree trunk and tipped his hat. His blue eyes sparkled with mischief in the evening twilight, letting off a faint glow. The man looked eerily recognizable.
She looked back to reassure her mother that she was okay. Lucessa scanned the woods behind her.
But they were gone. Only the familiar stranger remained. 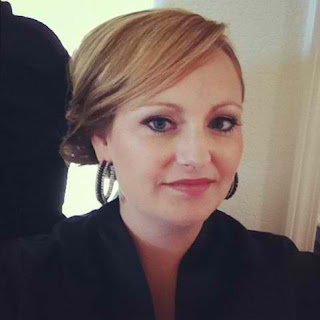 Christina McKnight is a book lover turned writer. From a young age, her mother encouraged her to tell her own stories. She’s been writing ever since.

In college, Christina took many courses to help develop and enhance her writing skills. She completed a seventy-page dissertation on the need for community policing in American society. Now, she focuses on Historical Romance, Urban Fantasy, and Paranormal Romance. Her debut Urban Fantasy novel, Only in Her Dreams, will be released on December 15, 2012.

Christina lives in Northern California with her husband, daughter, two boxers, two cats, and a Beta fish named Marmaduke. If she’s not behind a computer screen or book, she’s busy leading her daughter’s Girl Scout troop. She is very active in several writing groups and a local book group.


This book confused me at first. It jumps back and forth so much between so many different people, I felt a little lost.

I wasn't quite sure who the good guys were, who the bad guys were and who was completely indifferent to it all.

The story starts a year earlier with the death of Lucessa's husband Greg and then jumps to the present with Lucessa seeing a man that has been in her dreams before, watching over her. And two other men, also stalking her, but for very different reasons.

One wants to hurt her, one wants to protect her and one just might be in love with her, all of them brothers.

Thankfully my confusion was quickly cleared up after a few chapters and I didn't feel so lost and was able to enjoy the rest of the story as it unfolded.

I love Greek mythology and while I love it, I have to admit that my knowledge about the Oneiroi is very limited. I only knew a handful of things about them. That they are part of the dream world and can enter into the dreams of humans as they sleep at night. Making those dreams good or bad.

So it was fun to have this retelling of a Greek myth and to learn a little more about them as well.

The three brothers, Maxim, Guy and Darius are in a battle to either save Erebos or to destroy it. New loyalties and allegiances must be made, hearts must be broken, and lives will be doomed and nothing will ever be the same again.

Lucessa was a fun character. She was a little fierce and has been through a lot in her lifetime already. She was a pretty strong character that was easy to relate to.

Maxim was great too. I couldn't help but like how sincere and loyal he was to all those he cared about while still trying to protect and watch out for everyone, even those that he shouldn't.

I think this will be a fun series, one that is very different form the usual paranormal filled with vampires and witches and weres.

I think this will be one to watch for sure.